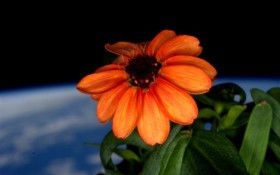 The International Space Station now has a bright pop of orange, thanks to commander Scott Kelly’s green thumb.

Kelly showed off his gardening results — a thriving zinnia with a beautiful orange-yellow bloom — over the weekend. He posted photos of the flower on his Twitter account.

“Yes, there are other life forms in space!” Kelly said in a tweet.

Last month, Kelly had to fight off mold that threatened to kill all the flowers in the space station’s mini-greenhouse. Mission Control gave him free rein, and he managed to save some of the crop. This type of autonomous gardening will be necessary during Mars expeditions, Kelly noted.

In a nod to last year’s blockbuster movie “The Martian,” Kelly said, “I’m going to have to channel my inner Mark Watney.” Watney is the fictitious astronaut-botantist who ends up stranded alone on Mars and grows potatoes in order to survive.

While this is the first zinnia known to bloom in space, it’s not the first space flower.

In 2012, space station astronaut Donald Pettit memorably coaxed blooms out of a zucchini plant, blogging about his informal experiment in “Diary of a Space Zucchini.” He also nurtured Space Sunflower and Space Broccoli.

The Russians hold claim to the first flower in space, aboard the Soviet Salyut space stations of the 1970s and 1980s.

These new space zinnias aren’t just for looks: NASA said they’re a good precursor to tomato plants, targeted to launch in 2018. The next hothouse crop, coming up soon on a SpaceX supply flight, will be Chinese cabbage and more lettuce.

NASA’s little greenhouse is known as Veggie, short for Vegetable Production System. It flew to the space station in 2014.

Diary of a Space Zucchini: http://tinyurl.com/h679xrj