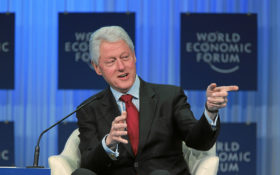 Less than a week after Clinton associate Jeffrey Epstein died under mysterious circumstances, new questions are being raised about another longtime Clinton hand who has seemingly disappeared.

Even the Clintons’ website has erased references to him—articles, pictures, all gone…and it’s got people talking.

Amitabh Desai was the director of foreign policy at the Clinton Foundation.

One of the Clintons’ main sources of income was setting up speeches for Bill Clinton to give to global dictators in places like Saudi Arabia, which donated tens of millions of dollars to the Clinton Foundation over the years.

All in all, Bill Clinton made 215 speeches overseas…and raked in $48 million from foreign leaders… all while his wife was U.S. Secretary of State!

But the Clintons wanted more—and Desai made the money flow.

He pushed State Department officials to let Bill speak in communist North Korea…and get paid for it!

In May 2012 Desai personally emailed Hillary’s chief of staff at the State Department, Clinton crony Cheryl Mills, whether it would be a problem for Bill Clinton to cash a check from Kim Jong-un.

“Decline it,” she wrote back.

Desai had a problem on his hands, because the person trying to arrange the speech was none other than Hillary’s brother, Tony Rodham!

So, Desai emailed other Washington D.C. bureaucrats to see if they would give a thumbs-up.

Even Hillary’s yes-men weren’t willing to go for that, so Desai moved on to another dictatorial country, the Democratic Republic of Congo, which offered Bill $650,000 for a speech and a photo op.

The State Department told him the country, where rape is rampant, wouldn’t be a good look.

But Desai wouldn’t take no for an answer and tried a new trick: What if Bill said the money for the appearances went to “charity”– the Clinton Foundation?

“WJC (William Jefferson Clinton) wants [to] know what state thinks of it if he took it 100% for the foundation,” Desai wrote.

They continued to do this country after country, and Desai kept the money rolling in.

Because of the huge penchant for bribery, Hillary Clinton promised any donations the Clinton Foundation got from new donors would be vetted by the State Department.

But she never said a word even though at least seven foreign countries made new donations — and Desai’s fingerprints were all over them.

Desai tried to broker a meeting for Bill Clinton to receive a “$1 million check that Qatar promised for WJC’s birthday in 2011.”

WikiLeaks showed that Desai demanded an Ethiopian shiekh give one of the Clintons’ “philanthropies” $6 million in exchange for a phone call from Bill Clinton.

Even Russia wasn’t off limits. Bill Clinton made $50,000 giving a speech to a Russian tech giant who officials accused of bribery.

But Desai didn’t just allegedly corrupt the Clinton Foundation…he helped make sure Bill Clinton’s friends and donors got the inside track for federal contracts.

When the Obama administration opened up $10 billion in aid for Haiti, he and State Department aide Caitlin Klevorick put Bill’s buddies first in line!

Klevorick, who used to work for the Clinton Foundation herself, told Desai “to flag when people are friends of WJC”… and they got the green light.

When someone applied for the pot of cash, she only asked one question: “Is this a FOB?”– friend of Bill?

Everyone who greased the Clintons’ palms got flagged to pick up fat federal contracts.

Desai was one of the key money men in the Clinton empire — pulling in bribes from overseas and giving out favors to Clinton donors.

He knew how to make things happen… and where all the bodies were buried.

Now investigators are asking: What happened to him?

He seems to have slipped off the face of the earth!

His “about” page, with his biography, has been scrubbed from the Clinton Foundation website.

The Clinton Foundation links to a blog that Desai wrote about “Bill Clinton’s unique form of public service” — but that blog’s gone.

It even looks like they erased Desai’s name from a photo of President Clinton and Desai in Haiti.

Guess what? The Clinton Foundation appears to have taken down a picture of Bill Clinton with Cashion, too.