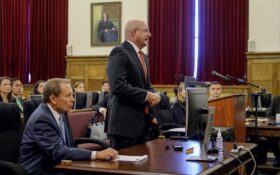 A trial in a lawsuit accusing three major U.S. drug distributors of causing a health crisis throughout West Virginia was postponed Tuesday, a day after the companies prevailed in another case in the state.

Attorneys who represented Cabell County and the city of Huntington on the losing end of a verdict announced in federal court Monday were granted a continuance of a trial a day later in Kanawha County Circuit Court. The trial involves more than 100 other cities and counties statewide against the same defendants: AmerisourceBergen Drug Co., Cardinal Health Inc. and McKesson Corp.

In the federal bench trial, U.S. District Judge David Faber said the plaintiffs offered no evidence that the companies distributed controlled substances to any entity that didn’t hold a proper registration from the U.S. Drug Enforcement Administration or the state Board of Pharmacy. The defendants also had systems in place to monitor suspicious activity, as required by the Controlled Substances Act, he said.

“Plaintiffs failed to show that the volume of prescription opioids distributed in Cabell/Huntington was because of unreasonable conduct on the part of defendants,” Faber wrote in a decision that came nearly a year after closing arguments in that case.

The Cabell County-Huntington lawsuit alleged the distributors created a public nuisance by flooding the Ohio River community with 81 million pills over eight years. The suit sought more than $2.5 billion that would have gone toward abatement efforts. But Faber said West Virginia’s Supreme Court has only applied public nuisance law in the context of conduct that interferes with public property or resources. He said to extend the law to cover the marketing and sale of opioids “is inconsistent with the history and traditional notions of nuisance.”

The companies blamed an increase in prescriptions written by doctors along with poor communication and pill quotas set by federal agents.

Huntington has long been an epicenter of the nationwide opioid addiction and overdose epidemic that has been linked to more than 500,000 deaths over the past two decades. That status led West Virginia to being aggressive in lawsuits over the trauma earlier than most states. It settled with the three distributors in 2017 and 2019 in deals worth a total of $73 million.

But the state did not participate in a $21 billion nationwide settlement with those companies that was finalized this year and would have resulted in a larger payout for West Virginia than what the state received in the earlier deals.

The nationwide impact of Monday’s ruling in West Virginia could be muted because the companies have struck the broader settlement, which is intended to have most of the funds go to fighting the opioid crisis.