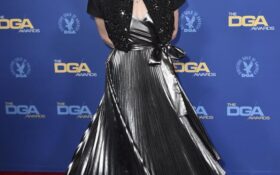 Actor Anne Heche has been laid to rest at a storied Los Angeles cemetery alongside many Hollywood luminaries, her family said Tuesday.

Heche was cremated and her ashes were placed in a mausoleum at Hollywood Forever Cemetery nearly two weeks after she was declared dead at a hospital from injuries suffered in a fiery car crash.

In a statement to The Associated Press, Heche’s son Homer Laffoon said he and her other son Atlas Tupper “are convinced our Mom would love the site we have chosen for her; it’s beautiful, serene and she will be among her Hollywood peers.”

The cemetery has in recent years become a cultural hub for film screenings, musical performances and festivals.

Laffoon went to see the band My Morning Jacket there after his mother’s death, with tickets bought before she died. He loved the vibrancy of the location, and took it as a sign that her grave should be there.

A small private memorial will be held once Heche’s headstone is etched.

“She was our Mom, but the kindness and the outpouring of the past few days reminded us that she also belongs to her fans, to the entertainment community, and now, to the ages,” the statement said.

Founded in 1899 and located near the Paramount Pictures lot, the cemetery is home to the graves and tombs of actors including Judy Garland and Douglas Fairbanks, and of musicians including Chris Cornell and Johnny Ramone.

Heche’s spot in the mausoleum in the cemetery’s Garden of Legends is near that of Mickey Rooney, and faces a lake where Burt Reynolds’ remains were recently relocated.

Heche, 53, was among the biggest film stars of the late 1990s, starring opposite actors including Johnny Depp and Harrison Ford, and had worked consistently in movies and television for more than three decades. But personal turmoil, which she described in a memoir and interviews, often followed her.

On Aug. 5, her car jumped a curb and smashed into a West Los Angeles home. Both the car and the home burst into flames. She was declared brain dead on Aug. 11, and was kept alive on life support for three more days so her organs could be donated.

Her death was ruled an accident, and the cause were inhalation injuries and burns, according to the Los Angeles County coroner.