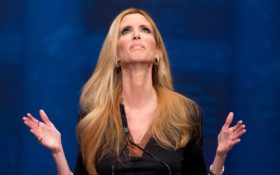 Once one of President Donald Trump’s biggest supporters, she’s now about to turn her back completely on the commander-in-chief.

Coulter wants him out of office entirely and it sounds like she’s leaning towards replacing him with… Sen. Bernie Sanders, I-V.T!?

Not only did she say she’d vote for Sanders, but that she may work for Sanders should he get elected to office in 2020.

When asked by PBS how she felt about Sanders’ idea to move away from “low-skilled workers,” which he predicted would drive wages lower, Coulter gave an impassioned response:

Ann Coulter feeling the Bern? The conservative commentator says Sanders has supported immigration policies that could earn him her vote, adding she’d be willing to overlook “the rest of the socialist stuff.” pic.twitter.com/8vH4LAWmVP

The conservative pundit also hinted that she’d cozy up to Sanders if changed his tune on immigration.

An issue that won’t be solved by open borders.

Sanders told the truth at a campaign earlier in the month, saying, “What we need is comprehensive immigration reform. If you open the borders, my God, there’s a lot of poverty in this world, and you’re going to have people from all over the world. And I don’t think that’s something that we can do at this point.”

“Can’t do it. So that is not my position,” Sanders said.

It’s unsure why the conservative hard-liner on border walls is frustrated with the president – he seemingly is doing everything he can get a border wall built, so much so that even his GOP allies have expressed anger over how President Trump has chosen to handle things.

Maybe she just wants a soundbite.

Once the darling of conservative media, she seems to have taken a back seat to other critics such as Ben Shapiro or Candace Owens.

Or is Coulter, as many other talking heads have done before, setting herself up for a position in a Sanders White House should he be elected?