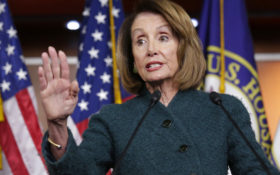 House Speaker Nancy Pelosi and the Democrats want to take back the White House next year so bad they can taste it —but the most important part of their platform just gotten shipwrecked, and the election could be next.

A major part of the Pelosi’s base — and one of its leading sources of cash and volunteers — just said the Green New Deal “poisons the well.”

Get control of the far-left, union bosses say, or else we’ll back President Donald Trump!

Richard Trumka, the boss of the powerful AFL-CIO labor union, said there’s no way his members will support the budget-busting boondoggle.

The plan calls for the government to shut down oil, coal, and natural gas production. Airplane would be banned from the sky.

Rep. Alexandria Ocasio-Cortez, D-N.Y., also wants to stop “cow farts,” give everyone a guaranteed annual income from Uncle Sam, and provide “economic security to all who are unable or unwilling to work.”

As ridiculous as the plan was, so far 11 Democratic presidential candidates have lined up to back it.

Beto O’Rourke just introduced his own version of the environmentalist proposal this week.

Kamala Harris, Bernie Sanders, Elizabeth Warren, Mayor Pete all threw their support behind it, and the list just goes on.

Things got so bad that Trumka broke the polite rules of politics and instead put Pelosi and the other Democrats on public notice: Hardhats and steel workers aren’t ever going to swallow that.

“Simply demanding that plants, industries, and projects be stopped or shut down, with no plan for the people who are put out of work, no call for shared sacrifice, and no dialogue or solidarity with those whose lives and communities are dependent on carbon-based fuels, that poisons the well politically,” he said.

As a matter of fact, he said that last September — but Trumka’s threat is so explosive that the Democrats covered it up until now!

To break the Fake News blackout, Trumka picked up the attack again in a major speech in Washington last Tuesday.

In the speech—that he knew would be covered—he said that unions are steamed that Ocasio-Cortez didn’t even consult them about her socialist takeover.

“We weren’t part of the process,” Trumka said last Tuesday in D.C., so “workers’ interests” weren’t “completely figured into it.”

Talk about an understatement!

The break between unions and the Democratic Party political structure, headed by Pelosi, sent shockwaves through D.C. and chills down the top 2020 candidates’ spines.

Labor unions have been one of the most important parts of the Democrats’ voter base since the turn of the last century.

The AFL-CIO donated more than $3 million to candidates last year — but that’s hardly the tip of the iceberg.

Unions broke a new record by making $217 million in campaign contributions in 2016…and 90% of it went to Democrats, just like it has for decades.

“Big Labor is now the ATM of the Democratic Party, whether employees agree or not,” said Luka Ladan, communications director for the Center for Union Facts.

But money can’t buy you love.

In 2016, Donald Trump pulled almost even with Hilary Clinton. In fact, Trump had the biggest union support of any Republican since Ronald Reagan‘s 49-state landslide in 1984.

That’s not even that half of it. Unions had already lavished $1.1 billion on anti-Republican groups from 2010 to 2016 and still fell flat.

“For decades, union officials have betrayed working Americans by spending their dues dollars to advance a left-wing political agenda—without prior approval,” Ladan said.

The workers union bosses say they represent give workers no choice at all. Some “closed shop” job sites force everybody who works there to fork over a good part of their paychecks to labor unions — who turn around and give it to anti-labor politicians like Cortez, Obama, Hillary, and Crazy Bernie.

With the economy on fire, unions could be one of Trump’s secrets to winning the industrial Midwest—and a second term—next year.

And if the Democrats keep campaigning on the Green New Deal, they may just lose all 50 states this time.