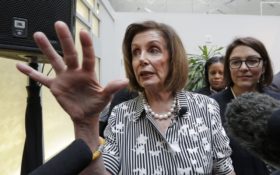 Democrats have seen the enemy — and based on their latest statements, they seem to think it’s each other.

And in this case, they’re not just attacking fellow political figures.

They’re attacking their own voters, with Democratic strategist Paul Begala dismissing them as “bad followers” and, in a separate interview, political consultant James Carville urging them to “quit being a whiny party.”

Both were insiders in the administration of Bill Clinton, and both have since become regular figures on the cable news circuit.

But they’re not using those appearances to explain the Democratic agenda to voters ahead of this year’s crucial midterm elections.

And they’re not working to undo the damage of a year of the Democrats’ control of Washington.

Instead, they’re turning to another time-tested strategy in political circles: finger-pointing.

While many see the failure to pass signature legislation as a sign of President Joe Biden’s weakness, Begala insisted that Biden himself is strong.

He’s blaming everyone else in the party… especially the voters.

“I think the problem for the Democrats right now is not that they have bad leaders,” he said on CNN. “They have bad followers, OK?”

Begala recited an anecdote about former President Lyndon B. Johnson saying he didn’t have enough political power to push voting rights through in the 1960s.

Civil rights activist Andrew Young said he asked Martin Luther King Jr. what they should do, according to the story cited by Begala.

“He said, ‘I think we got to go get the president some power,’” Begala recounted. “And so you know what they did? They organized. These are Andy Young’s words, ‘We mobilized the churches, the universities, the labor unions, the business community, a coalition of people of goodwill.’”

For Biden to pass his agenda — including voting legislation — Begala said Democrats have to take it on themselves.

“We need to get to work. I do think Biden is putting everything behind this. But he needs better followers,” he said “He needs all of us in the game as well.”

Begala’s comments didn’t go over well online, as critics on both the left and right tore into him:

The context for that comment makes clear that it's not just as bad as it appears, but worse: Begala is claiming Biden's failures and the collapse of his presidency is not due to his mistakes but the failure of Dem "followers" (good word) to work harder:https://t.co/GS0R9YPsjN

it's going to be a blood bath https://t.co/zUIaBadBBv

He actually said this. https://t.co/puosPM0z47

No, @PaulBegala, the problem is bad party leadership. Sorry. I know you're friends with them, but they are not using the tools at their disposal to achieve the outcomes they say they want. Which, consistent with their records, implies they do not actually support those outcomes. https://t.co/iKSLLGYyju

Over on NBC News, Carville didn’t fare much better as he slammed his own party.

Like Begala, he praised Democratic leadership, claiming the year was full of success stories for the party as he insisted child poverty is down and wages are up.

“Those are real accomplishments, and it’s something that you can run on,” Carville insisted to host Chuck Todd. “And, again, you don’t talk about what you didn’t get… Democrats whine too much, Chuck. Just quit being a whiny party and get out there and fight and tell people what you did, and tell people the exact truth.”

He even insisted that Democrats on the campaign trail this year could “gloat and promote” their accomplishments in Washington.

ICYMI: "Democrats whine too much," Democratic strategist @JamesCarville says on #MTP as independents drift away from the party in polling.

"You don't talk about what you didn't get. … Quit being a whiny party and get out there and fight and tell people what you did." pic.twitter.com/dyLAVTsPSy

Carville is correct that wages were up in 2021. As of the end of October, American workers saw a salary increase of 4.9 percent for the year.

But there’s an important caveat to the “real accomplishment” that he left out: Inflation was up 6.2 percent over that same period, essentially erasing those salary gains and then some, leaving workers with less money overall.

To Carville, that may be whining.

To consumers, it’s not a “real accomplishment” but real pain as they watch the value of their dollars shrink before their eyes.

But he did recognize one basic fact about those numbers – something that could lead to a sea change in Congress come November.

“If inflation is still at 7 percent in November this year, we’ll lose anyway,” he admitted.