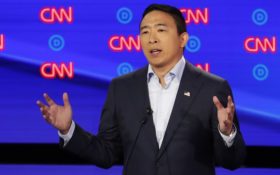 A one-time sensation in the Democratic Party who earned a zealous social media following with his dark-horse 2020 presidential campaign is now drawing anger from the left.

And it’s because of a move that, they say, could help former President Donald Trump reclaim office if he runs again.

Andrew Yang, who ultimately endorsed Joe Biden after dropping out of the race last year, is reportedly forming a third party.

Politico says the tech entrepreneur plans to announce the move on Oct. 5, timed for the release of his new book Forward: Notes on the Future of Our Democracy.

Insider said an unnamed source close to Yang confirmed the plan. The New York Post additionally confirmed that Yang is no longer a Democrat.

“What we have here is another wealthy interloper who found that he had a taste for cheap political celebrity,” liberal pundit Charles P. Pierce wrote for Esquire. “This is not the time for people like him. Go away, Andrew. Your money’s no good here.”

From the right, the criticism was even more blunt.

“Allow me to be the first to congratulate Andrew Yang on electing Donald Trump president in 2024,” wrote Sarah Longwell, a “Never Trump” Republican.

But Yang’s publisher, Crown, insists his new book will offer “a lively and bold blueprint for moving beyond the ‘era of institutional failure’” and that he will name “the various ‘priests of the decline’ of America, including politicians whose incentives have become divorced from the people they supposedly serve.”

The publisher is also touting endorsements from prominent names such as entrepreneur Mark Cuban, who called it “a vitally important book.”

But any effect on the 2024 election is likely to help Trump, should he choose to run again. All signs suggest Republicans will almost certainly stick with their standard-bearer if he’s on the ballot.

Democrats, however, could be more easily divided – and even a small percentage choosing Yang’s new party could swing the election to the Republican candidate.

Allow me to be the first to congratulate Andrew Yang on electing Donald Trump president in 2024. https://t.co/zAWDZeGp0C

Yang made headlines throughout the campaign for his debate performances, and won a hardcore group of fans dubbed the Yang Gang.

But none of that translated into success at the ballot box.

After a poor showing in the New Hampshire primary, he pulled the plug on his campaign and endorsed Joe Biden.

At the time, he seemed to expect a role in any potential Biden administration.

“We’ve had general conversations about the fact that Joe would like me to play a role and be helpful, yes,” he told Time magazine. “I’m driven to help Joe win. And I think that we’re going to need all hands on deck to help clean up the historic crises that [we’re] in the midst of.”

It’s not clear whether he didn’t get an offer — or didn’t want one — but he ultimately played no role in the Biden administration.

But he didn’t leave politics.

Earlier this year, Yang ran for mayor of New York.

But once again, he found himself much better at making headlines than relating to voters – including one headline that may have tanked his chances of election.

That’s the revelation he fled the city during the pandemic for a home upstate in New Paltz, NY.

To defend himself, he said, “Can you imagine trying to have two kids on virtual school in a two-bedroom apartment and then trying to do work yourself?” Voters didn’t appreciate that comment, given that many of them were doing just that.

He drew just 12 percent of the vote and was eliminated in the first round of the ranked-choice Democratic primary, which effectively served as the general election given the city’s heavy Democratic leaning.

Now, he seems to be hoping for better luck in 2024 … but he might end up playing spoiler instead.