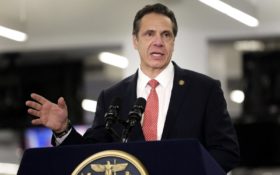 New York Governor Andrew Cuomo has said President Donald Trump has blood on his hands for failing to send New York enough ventilators — but an uncovered government report shows that Cuomo is the one who fell down on the job.

Instead of buying ventilators, he came up with a plan to ration the machines and let his own people die.

President Donald Trump’s calm handling of the coronavirus outbreak has won him the support of a majority of Americans—and he’s tried hard to remain bipartisan.

On Monday, Trump said he and Gov. Cuomo were “working hard together. The relationship has really been amazing.”

But one day later, Cuomo opened fire on the president in a press conference on COVID-19.

“The president said it’s a war…then act like it!” he said.

“You want a pat on the back for sending 400?” he asked Trump sarcastically.

Cuomo claimed he had “no other way” to get the machines except for Trump to ship them to him. “We’ve tried everything else. The only way we can obtain these ventilators is from the federal government. Period.”

The Democratic governor, who’s said to be mulling over a presidential run, said Trump should have to “pick the 26,000 people who are going to die because you only sent 400 ventilators.”

But Vice President Mike Pence announced Tuesday another 4,000 ventilators would be shipped over the next two days, with half bound for New York City.

Trump put the blame squarely on Cuomo. The New York governor ignored a 2015 report warning that the state didn’t have enough ventilators.

“New York governor Cuomo rejected buying for a pandemic,” Trump told Fox News. “He had a chance to buy, in 2015, 16,000 ventilators at a very low price, and he turned it down.”

“He shouldn’t be talking about us. He’s supposed to be buying his own ventilators,” Trump said.

The 2015 report said the state needed over 15,000 ventilators in case of a pandemic.

“Influenza pandemics occur with unpredictable frequency and severity,” the report said. “A moderate pandemic likely would result in a shortfall of ventilators.”

The report warned the governor against relying on the president to bail him out.

“There is a federal government stockpile of ventilators, but… there are not enough ventilators to be distributed to meet demand if many regions need them at once,” it said.

Then the report dropped a real bombshell: Andrew Cuomo wasn’t going to buy the ventilators, anyway.

“There are no current plans to buy enough ventilators for the most severe model,” the report said.

Instead, he sunk $750 million into a solar panel factory that created 750 jobs—and gave the people of New York their very own death panels.

The report admitted, “In the event of an overwhelming burden on the health care system, New York will not have sufficient ventilators to meet critical care needs despite its emergency stockpile.”

So, patients who show up wheezing and unable to breathe won’t get a ventilator: They’ll get a code.

A “triage officer” will give rate each patient red, green, yellow, or blue (the worst), and give—or deny—them access to the ventilator.

“Let’s not sugarcoat it,” McCaughey wrote, the triage officer is really “a death officer.” Whether you get treatment or suffocate to death “won’t be up to your own doctor.”

That’s bad news for 44% of the people hospitalized with coronavirus, who need the ventilators Cuomo refused to buy.

Almost one out of every 10 coronavirus cases in the world are in New York—a state that just fought with the Trump administration over open borders.

And Cuomo has already signaled that he’s setting Donald Trump up to take the blame for the decision Cuomo made five years ago.

It’s up to voters to decide if he gets away with it.