And justice for all… Freeway shooter caught - The Horn News 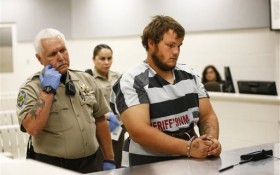 PHOENIX (AP) — Soft-spoken and handcuffed, a 21-year-old landscaper insists that he is not responsible for a string of Phoenix freeway shootings and that his gun has been sitting in a pawn shop for months.

Despite Leslie Allen Merritt Jr.’s impromptu assertion in court Saturday, investigators said they have proof that the gun wasn’t in any pawn shop at the time of four shootings they say he carried out.

Newly released charging documents detail the detective work that traced the gun to the suspect after he took it to a pawn shop. Weapons from various local pawn shops were test-fired at the state lab, Arizona Department of Public Safety spokesman Bart Graves said.

The Glendale resident faces several charges, including aggravated assault, criminal damage, disorderly conduct, carrying out a drive-by shooting and intentional acts of terrorism. Merritt told a judge that authorities have “the wrong guy.”

In a brief court appearance, a prosecutor said Merritt should face a high bail after drivers spent the last three weeks on edge. Overall, 11 freeway shootings were reported, but Merritt is only charged in four.

“The suspect presents a dramatic and profound threat to the community,” said Ed Leiter of the Maricopa County attorney’s office.

Superior Court Commissioner Lisa Roberts set bail at $1 million, and Merritt, who had remained quiet during the proceedings, asked to address the court.

“All I have to say is I’m the wrong guy. I tried telling the detectives that. My gun’s been in the pawn shop the last two months. I haven’t even had access to a weapon,” he said as he stood handcuffed in a black and white striped jail uniform.

But a charging document released late Saturday night by Maricopa Superior Court said that investigators determined Merritt had not pawned his gun at the time of the incidents.

Merritt was arrested Friday evening after a SWAT team swarmed him at a Wal-Mart in Glendale. Minutes later, Gov. Doug Ducey proclaimed on Twitter, “We got him!”

Graves said the break in the case was the result of exhaustive investigative work. Evidence from shell casings and bullet fragments determined that a gun Merritt pawned was used in four of the shootings on Aug. 29 and 30, Graves said. A tour bus, SUV and two cars were hit by bullets on Interstate 10 on those days.

Graves declined to comment on Merritt’s statement in court that his gun was in the pawn shop at the time of the shootings and similar statements made by his family.

“The evidence as you’ll see in the next couple of days speaks for itself,” Graves said. “We’re not going to get in a debate about that.”

The charging document said that investigators determined by testing that the bullets and the bullet fragments from four incidents came from a gun that was owned by the suspect.

Burges McCowan, a criminal defense attorney who used to work as a Maricopa County prosecutor, said he would piece together where Merritt was during the shootings if he were handling his case.

“I suppose it’s always possible the state jumped the gun and didn’t thoroughly look through his timeline before going after him,” McCowan said. “But I would hope in a case this important, they would make sure that the gun was not pawned during the time of the shootings.”

McCowan said he would also emphasize the other incidents and why Merritt hasn’t been charged in those. He also would not have allowed him to talk in court.

“I would agree with the judge who told him he shouldn’t talk. He might have pinned himself in now for his defense,” McCowan said. “If the records don’t match up with that statement, he’s made his situation worse.”

Eleven vehicles in all were hit by bullets or other projectiles, such as BBs or pellets, while driving along Phoenix freeways between Aug. 29 and Sept. 10. There have been no serious injuries, although a 13-year-old girl’s ear was cut by glass when a bullet shattered a car window.

Department of Public Safety Director Frank Milstead said the investigation continues into who is behind the other shootings.

Messages seeking tips about the shootings will remain posted on electronic signs along freeways, and a $50,000 reward is still available, Graves said.

In an interview with The Associated Press, Merritt’s father was adamant that his son had nothing to do with the shootings and anyone who says he was involved is a “moron.”

Leslie Merritt Sr. said he believes his son is being made a scapegoat by police who were desperate to make an arrest under immense public pressure.

“He has way too much value for human life to even take the slightest or remotest risk of actually injuring someone,” the elder Merritt said. He said his son likes guns but is not a criminal.

Merritt Jr.’s Facebook page, confirmed by his father, has two video clips that show him firing guns into the desert toward a palm tree, exclaiming “whoo” after squeezing off a round.

The Wal-Mart where Merritt Jr. was arrested Friday is 6 miles north of where some of the shootings occurred along I-10, a major route through the city.

The shootings prompted several school districts to keep their buses off freeways, and some commuters altered their routes.