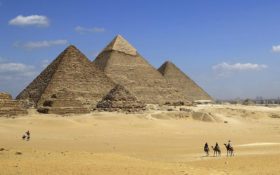 One of the world’s greatest mysteries may have just been solved.

Archaeologists have long been baffled over how the ancient Egyptians were able to build the Great Pyramid of Giza, which stands a whopping 415 ft tall.

They were specifically questioning how the Egyptians had the capacity to transport such massive amounts of rock such long distances.

But researchers are saying that mystery may have just been solved.

While it’s been known that the granite was carried 533 miles south from Giza, and the limestone eight miles away from Tura, archaeologists had multiple theories has to how the heavy weight was actually transported.

But recently uncovered evidence suggests ancient Egyptians made the Great Pyramid at Giza by transporting 170,000 tons of limestone in boats.

Archaeologists discovered an ancient papyrus, a boat, and a system of waterworks that provide further insight into the mystery of the pyramids building.

This evidence shows thousands of workers used wooden boats, planks and rope to transport the massive weight of limestone along the River Nile.

The papyrus, found in the seaport Wadi Al-Jarf, is the only first-hand account of the pyramid’s construction. It describes the transportation of the limestone in great detail.

Written by Merer, an apparent manager of 40 workman, it describes how they shipped the stone 500 miles.

His diary described how the men opened embankments to redirect the Nile, creating waterways to the pyramid, now part of modern day Cairo.

The 2.5 ton blocks were then ferried through these waterways before arriving at the base of the pyramid.

It’s incredible additional insight into history that has been boggling the minds of specialists for decades.

The discoveries were revealed in the documentary “Egypt’s Great Pyramid: The New Evidence,” and originally reported by The Daily Mail.