Ancient Christian mystery has been solved? - The Horn News 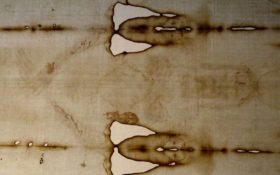 A centuries-old battle over one of the most revered artifacts in the Christian faith reached a new boiling point this week.

In one corner: A new study that casts doubt on the Shroud of Turin. According to tradition, it’s the burial cloth of Jesus Christ. But this week, researchers claimed it’s a medieval forgery.

In the other: Experts who say that the REAL fake is the study itself – and that in their rush to dismiss the shroud, they inadvertently may have helped to PROVE that it just might be the real deal.

And that would mean the image on the shroud… and the blood within it… both belong to none other than Jesus Christ Himself.

In the study, two researchers claim to have used CSI-style techniques to study the blood stains on the cloth.

“This is the kind of forensic work done all the time in police investigations,” study co-author Matteo Borrini, an Italian forensic scientist currently at Liverpool John Moores University in the United Kingdom, told Buzzfeed. “Even a crucified or hanging person should leave a distinct blood pattern on the cloth, which would be fascinating information to have.”

After experiments using both a human subject and a mannequin as well as both real and fake blood, Borrini and his coauthor declared that the patterns on the shroud are “totally unrealistic.”

The study in the Journal of Forensic Sciences claims that what’s seen on the shroud simply isn’t consistent with what would be expected of a crucifixion victim.

“This is just not what happens to a person on a cross,” Borrini told BuzzFeed.

But shroud expert Emanuela Marinelli blasted the study, telling Vatican News “there was nothing scientific” about how it was conducted.

“Does it seem like a scientific criterion to take a mannequin – like the ones used to display clothes in a store window – and a sponge soaked in fake blood attached to a piece wood that is pressed on the right side of a dummy to see where the streams of blood fall?” she asked, according to the Catholic Herald. “If this is considered science, I guess I’ll just have to take my degree in natural sciences and throw it away.”

She’s not the only one questioning the study

Bloodstain expert Jonathyn Priest told Buzzfeed that while the methodology behind the research is sound, it may not account for all of the possibilities. Some of the bloodstains on the shroud, he said, would seem to require a “beating” heart.

“The fact that flowing bloodstains exist at all on a deceased body that was reportedly cleaned also raises questions,” he said.

The answer to those questions could further suggest an elaborate hoax or, to the contrary, just the opposite.

It could be direct evidence of something quite supernatural that took place some 2,000 years ago.

The shroud has been at the center of controversy for centuries, with radiocarbon tests dating it to roughly the 13th century, and not the time of Christ. Critics of those tests say the researchers may have captured the age not of the shroud itself but of repair work done in the Middle Ages.

But to the faithful, it may not matter: The shroud isn’t about a piece of cloth and arguing over whether or not it’s real is beside the point.

It’s about what it represents.

The Catholic Church doesn’t have an official position on the authenticity of the shroud, but it’s clear that what it awakens in the devout is as genuine as it comes.

“The icon of this love is the shroud, that, even now, has attracted so many people here to Turin,” Pope Francis said during a 2015 visit to Turn. “The shroud draws [people] to the tormented face and body of Jesus and, at the same time, directs [people] toward the face of every suffering and unjustly persecuted person.”