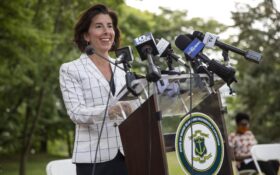 Gov. Gina Raimondo announced that she has signed an executive order to remove the phrase “Providence Plantations” in the state’s formal name from some official documents and executive agency websites, the “first step” in the process of formally renaming the state.

The formal name change comes after several weeks of meetings with community and youth leaders and is an effort to address racial inequities in the state following a national push for progress after George Floyd’s killing last month, the Democratic governor said.

Raimondo said she heard from people of color who received citations from the state but were too ashamed to hang them on their walls because of the word “plantations,” so they stuck it away in a drawer, she said.

Rhode Island was originally founded as the Colony of Rhode Island and Providence Plantations when first settled by European colonizers. At the time, planations was a synonym for “settlement” or “colony.” Rhode Island was the first colony to abolish slavery in America on May 18, 1652.

It was incorporated as The State of Rhode Island and Providence Plantations when it declared statehood in 1790.

Although the word in the state name does not specifically refer to a place where slaves labored, that does not mitigate the pain it causes, Raimondo said at the news conference attended by state lawmakers and community activists. “We can’t ignore the images conjured by the word plantations,” she said. “It’s past time to get rid of it.”

Raimondo also said she is supporting efforts for a statewide referendum to erase the phrase from the state’s official name. A similar effort a decade ago failed overwhelmingly.

Rhode Island was founded by Roger Williams on the principles of acceptance and tolerance, and the state’s name should reflect those values, she said.

Calls to drop the word “plantations” have intensified recently as protesters across the country have called for racial justice since Floyd’s May 25 death at the hands of Minneapolis police.

“This is what gives me hope to continue,” she said.

State Sen. Harold Metts, 72, who is Cape Verdean and African-American, said the state’s official name has been an embarrassment to him for a long time.

In addition to the executive order, Raimondo has directed the state Department of Administration to institute mandatory implicit bias training for all executive branch employees and develop more comprehensive equity training.

She also directed the Rhode Island State Police to form an outreach team to work with community leaders to find ways for police to better serve residents, and to develop a plan to equip all state police troopers with body-worn cameras.

The Department of Administration is also looking at state contracting practices to ensure that minority-owned businesses have an equal shot at landing state contracts, Raimondo’s statement said.

General Treasurer Seth Magaziner also said Monday his office will remove the words “and Providence Plantations” from the state’s checks, letterhead, citations, and other correspondence.