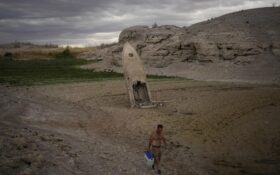 A National Park Service dive team confirmed Oct. 18 that a bone found a day earlier at Callville Bay was part of “human skeletal remains” on the Nevada side of the Colorado River reservoir behind Hoover Dam, according to a statement from the Lake Mead National Recreation Area.

“At this time, no foul play is suspected,” the statement said, and the Clark County coroner’s office in Las Vegas was working to confirm the identity of the dead person.

The discovery marked at least the sixth time since early May that remains identified as human have been discovered in shallow water or on the dramatically receding shore of the lake. The water level has dropped more than 180 feet (55 meters) since the lake was full in 1983, putting it at less than 27% full today.

A man’s body found stuffed in a barrel near Hemenway Harbor on May 1 has not been identified, but Las Vegas police said he had been shot, probably between the mid-1970s and the early 1980s, and his death is being investigated as a homicide.

Remains found May 7 at Callville Bay were identified in August as Thomas Erndt, a 42-year-old Las Vegas man believed to have drowned during a family boat outing in 2002. Callville Bay is one of several lake marina and resort areas.

Several more sets of partial human skeletal remains have been found since then — including on July 25, Aug. 6 and Aug. 16 — generally near a swimming area at the lake. They were not in barrels.

Seven states in the U.S. West and Mexico draw water from the Colorado River. Scientists attribute the drop in lake water levels to a warmer and drier climate affected by atmospheric warming, mainly due to rising levels of carbon dioxide and other greenhouse gases.