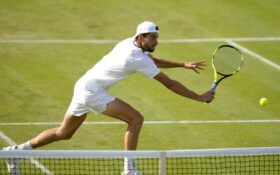 Brandon Nakashima’s victory over 2021 Wimbledon semifinalist Denis Shapovalov at Court 12 on Thursday at the All England Club? Martin Blackman was there.

That came after Taylor Fritz used a full-on, headfirst dive to reach an unreachable shot on the way to eliminating Alastair Gray on the same patch of grass. Blackman was present for that one, too, just as he was for Jenson Brooksby’s win at Court 17.

All in all, it’s been quite a productive — and rare — start to Wimbledon for Nakashima, Fritz, Brooksby and other American men: There will be eight of them in the third round, accounting for a quarter of the 32 players left in the field, the most for the country at the grass-court Grand Slam tournament since 1995. It’s also the most at any major since the 1996 U.S. Open.

And so, in some ways, it’s been quite a start for the U.S. Tennis Association and Blackman, the general manager of USTA Player Development.

“It was fun. It was really fun. I was bouncing around,” Blackman said during an evening rain delay Thursday, before heading back out to watch 18-year-old American Coco Gauff beat Mihaela Buzarnescu 6-2, 6-3 on Centre Court.

Gauff, the French Open runner-up, became the fourth U.S. woman in the third round, joining No. 8 seed Jessica Pegula, No. 20 Amanda Anisimova and Alison Riske-Amritraj. Gauff faces Anisimova next.

“We’re moving in the right direction. Obviously the goal isn’t the third round. The goal is much farther than that,” Blackman said. “But when you get numbers like this, it’s an indicator of a process that’s working. So I think that’s what’s so encouraging. All the guys that are in the third round want to go much farther; I don’t think any of them are satisfied.”

Still, any sort of positive sign for U.S. men in tennis is bound to gain attention. They haven’t had the success the women have lately, led, of course, by Serena Williams and Venus Williams, but also with major trophies in the past five years for Sloane Stephens and Sofia Kenin, and runners-up in that span such as Gauff and Madison Keys.

Consider the history: No man from the country that produced Bill Tilden and Don Budge, John McEnroe and Jimmy Connors, Pete Sampras and Andre Agassi has won any singles Grand Slam title since Andy Roddick did 19 years ago at the U.S. Open.

Then there’s this: In 2013, zero men from the United States reached Wimbledon’s third round — something that hadn’t happened since 1912, when no Americans entered the event.

The country is assured of an eighth spot in the third round because two Americans were facing each other in a match suspended because of rain and postponed until Friday. Jack Sock was leading Maxime Cressy 6-4, 6-4.

“I mean, we don’t have what everyone’s kind of looking for in terms of like the world No. 1 or the Grand Slam champion, but we have so much depth — like so much more depth than I think we have ever had,” said Fritz, a 24-year-old who spent time in the USTA program full-time, as have others such as Tiafoe and Paul.

“We have so many guys seeded in the top 32, so many guys making second, third round. Probably soon we are going to have a lot of guys contending (in the) second week of Slams, quarterfinals, stuff like that,” Fritz said. “The good news is the majority of the field is younger. We are only going to keep improving, getting better.”

Among the U.S. men remaining, only Isner, a 37-year-old who defeated two-time Wimbledon champion Andy Murray in the second round, and Johnson, 32, are out of their 20s.

Nakashima, the youngest of the bunch, played an attacking, yet clean, brand of tennis against Shapovalov, including just 14 unforced errors while winning all seven points on which he played serve-and-volley.

“He stayed extremely solid. Was very difficult to find weaknesses,” Shapovalov said. “Didn’t give me much at all to fish for.”

Blackman pointed to a decentralized structure of sectional, regional and national camps for juniors and customized support of players from 15 to 22, sometimes letting them stay at home and sometimes bringing them into the program.

He also was sure to mention the importance of the talent and mindset of the players themselves.