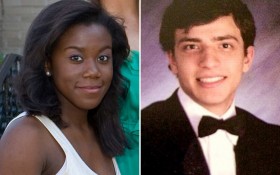 Judge Alexander told the court that she knew their desire to commit terror is “still there”. The judge ordered them held without bail, pending federal grand jury action on the charges.

“It was a very calculated, step-by-step thing,” Alexander said of the planning that led the pair to the Golden Triangle Regional Airport Saturday morning. FBI agents arrested them there, filing criminal charges that both were attempting and conspiring to provide material support to a terrorist group.

An FBI agent’s affidavit said both confessed their plans after their arrest. Defense attorneys declined to comment after the hearing.

In court, prosecutors said Jaelyn Young had been trying to convert her sister to Islam as well.

The government says FBI agents began interacting online with Young in May about her desire to travel to Syria to join the group.

Young touted her skills in math and chemistry and said she and Dakhlalla wanted to be medics treating the injured. Later, the charge says, she told the second FBI agent Dakhlalla could help with the Islamic State’s Internet media, saying he “really wants to correct the falsehoods heard here” about the group, which she called by its preferred internal name, Dawlah.

Dakhlalla expressed a desire to become a fighter for the group. “I am willing to fight,” he is quoted as saying.

Young later told the FBI that she and Dakhlalla got married June 6. She also expressed a desire to “raise little Dawlah cubs.”

The FBI said Dakhlalla and Young both expressed impatience over getting passports and the charges say Dakhlalla paid $340 to expedite passport processing on July 1.