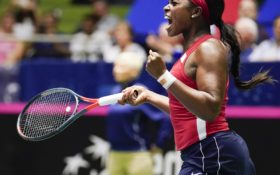 Both tweeted the news Monday, posting a photo and brief message.

In addition to winning a Grand Slam title 1½ years ago, Stephens was the 2018 French Open runner-up and was a member of the 2017 championship U.S Fed Cup team.

The 26-year-old American currently is ranked No. 8.

The 29-year-old Altidore has scored 41 goals in 110 international appearances since his U.S. national team debut in 2007. He has not played for the Americans since October 2017, when a loss at Trinidad and Tobago prevented them from qualifying for the 2018 World Cup.

Altidore has been with Toronto FC in Major League Soccer since 2015.