Amber Alert: Sex-offender may be taking baby to the coast - The Horn News 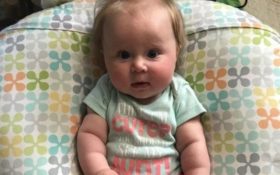 Authorities in North Carolina and Virginia are following up on tips as they search for a 7-month-old girl they say was abducted at knifepoint from the baby’s mother.

An update Monday night said Kennedy may have been spotted in Seven Springs, southeast of Raleigh, and could be headed to Oak Island on the North Carolina coast.