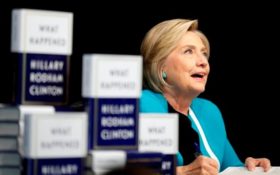 Amazon CEO Jeff Bezos has been notoriously anti President Donald Trump since he announced his candidacy.

But he’s taken his personal political opinions too far, and is now influencing his massive retailer website to silence those critical of twice failed presidential nominee Hillary Clinton.

Clinton released her new memoir “What Happened” on Tuesday, which chronicles her failed campaign against Trump.

There were mixed reviews on her chart-topping book. Not surprising considering she is a controversial political figure.

But if you check Amazon’s page selling her book, the reviews are overwhelmingly positive.

But it wasn’t always that way.

Hundreds of one-star reviews were removed from the page within hours of the books publication, The Guardian first reported.

On Wednesday, there were 1,500 reviews posted to the site. By Thursday, only 581 remained, 95% of which were five-stars.

And the worst part is, Amazon admitted it!

According to the liberal-run site, Amazon will “remove customer reviews that violate our community guidelines. When we find unusually high numbers of reviews for a product posted in a short period of time, we may restrict the number of non-Amazon Verified Purchase reviews on that product,” the company told The Guardian.

But this isn’t the first time Amazon had censored reviews.

In November, when former Fox News host Megyn Kelly released her new book “Settle For More,” 76% of reviewers gave it one-star, according to Slate.

Just like with Hillary Clinton’s book, critical viewpoints were actively being silenced by Amazon.

What’s the point of reviews if they will only reflect a selected viewpoint?

Maybe for Jeff Bezos, that answer if having them reflect his personal viewpoint.

Abuse of power at its best.