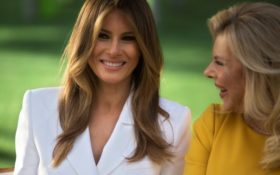 While the American media is silent, Israeli news sources are raving over First Lady Melania Trump’s visit to Israel, saying she “moved Israelis.”

Wife of President Reuven Rivlin, Nechama Rivlin, uses an oxygen concentrator to assist in her breathing.

As the two first ladies were arriving at a press conference together, Reuven reportedly told Melania not to wait for her, and she would do her best to keep up even though her oxygen tank would slow her down.

That’s when Melania showed her graciousness, taking Reuven’s hand and saying, “We’ll walk at any pace you choose.”

The photo gained attention in Israeli press, as citizens cheered on the two first ladies and their symbol of solidarity between the two nations.

But the American media was silent. And judging from the media’s coverage of the Trumps in the past, it can be expected that this photo will never outwardly be publicized in the U.S.