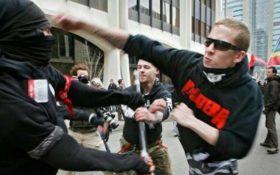 The alt-left is the home of today’s violent fascism – and you’re on their victims’ list. If you have any doubt, a new video proves it in their own words.

Ironically, they call themselves anti-fascists, or “Antifa,” but they are mirror images of the movement they hate.

Last month, Antifa protesters tried to shut down a white nationalist conference held in rural Tennessee by a group calling itself American Renaissance.

“A lot of times it includes,” he said – taking a long, embarrassed pause – “actual violence.”

When Reeve asked if he thought beating people up is “unethical,” the Antifa leader didn’t bat an eye.

“I’m OK with that,” he said. “I don’t feel bad for ruining their f—ing weekend.”

They tried their best in Tennessee. Antifa “paid a hotel worker for information, and booked a room across the hall,” Vice reported.

Then the left-wing activists threw nails in front of the conference goers’ cars and flattened their tires, according to Matt Heimbach, the former head of the now-defunct “Traditionalist Workers Party.”

Antifa activists even got into a car chase with people whose tires they hadn’t shredded with nails, according to Reeve.

These protesters seem to think they’re the modern Sixties-era demonstrator advancing “social justice” – including Reeve, a blonde twentysomething waif with ‘70s Gloria Steinem-style wire rim glasses – but they’re closer to the Nazis they hate so much.

In the Vietnam-era, hippies (who called themselves “peaceniks”) were lucky not to get killed as they sang songs, put daisies in soldiers’ gun-barrels, and held sit-ins at segregated lunch counters. Occasionally, they got beaten, assaulted with a police water-hose – even killed, like at Kent State.

Today, they slash your tires and beat up elderly people at Trump rallies.

These are the same tactics the Nazis and fascists used to break up meetings of their opponents in the 1930s. It was wrong then, and it’s every bit as wrong now.

The floodgates seemed to open when someone decided to “punch a Nazi” and slug racist Richard Spencer in the face last year.

I’m all in favor of people protesting Spencer and his racist ilk – they would shred the Constitution and replace it with a Millennial version of Mein Kampf if they were given the chance. They are the opposite of everything a patriotic American conservative is.

But what separates free countries like America from the fascists and totalitarians is this: We don’t believe anyone deserves violence for what he’s thinking or saying. If you’re an idiot, we call you an idiot and humiliate you through debate.

Richard Spencer and the Antifa alt-left deserve each other – hell, they are each other.

But don’t kid yourself: neither one of them would stop by beating up their current enemies.

Sooner or later – and probably sooner – you’re going to be in their crosshairs.

Just look at how Antifa justified violence against conservatives who criticized them for punching people:

Even fellow radical socialists qualified for violence – and fast.

They label feminists who don’t believe all-female colleges (or showers) should be opened to transgender women-who-have-penises hatemongers and call them “trans-exclusionary radical feminists” or TERFs.

And they believe those women deserve to be viciously beaten until they change their “hateful” rhetoric.

“Violence against TERFs is always self-defense,” Edinburgh Action for Trans Health tweeted. It “does not matter who ‘instigated’ a particular altercation, fascism is inherently violent.”

The group continued that, “as long as transmisogyny permeates our society,” it “must be radically & transformatively violent.”

Which I guess means males punching older women in the face – and then everybody else who doesn’t believe grown men should shower next to little girls at the gym.

we will be slurred as violent for as long as transmisogyny permeates our society. therefore, we must be radically & transformatively violent

Antifa’s neo-fascist terrorism deserves the strongest condemnation the media can muster – and the longest sentence judges can hand out.

American patriots should oppose every group that believes in violence. Someone should tell liberals that it’s impossible to defeat the Nazis by becoming one.

— Frank Holmes is a reporter for The Horn News. He is a veteran journalist and an outspoken conservative that talks about the news that was in his weekly article, “On The Holmes Front”