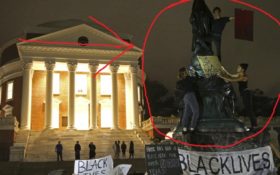 If America thought the alt-left’s attack on the history of the United States ended with Confederate monuments, Black Lives Matter just proved that to be a fantasy.

Tuesday, approximately 100 Black Lives Matter members participated in a protest against Thomas Jefferson at the University of Virginia that ended with the desecration of his statue.

The protesters demanded a balancing of Virginia’s “historical landscape” and dubbed the statue of Jefferson “an emblem of white supremacy” that must be altered and “re-contextualized” in history.

In other words, they demanded the history of our founding father’s statue be changed so he’s labeled as a racist.

They targeted moderate Democrats as well, saying they “fetishize the legacy of Jefferson, and imagine him as our collective moral compass” that creates “a hierarchy within white supremacy!”

“We can and must condemn the violence of [Charlottesville] one month ago and simultaneously recognize Jefferson as a rapist, racist, and slave owner,” a speaker declared. “The visibility of physical violence from white supremacists should not take our attention away from condemning and disrupting more ‘respectable’ racists that continue to control the structures that perpetuate institutional racism.”

The protesters climbed on the statue and covered the statue with a black shroud, then covered it with signs that said, “Rapist!” and “Racist!” — a desecration that was quietly removed by the University overnight.

Experts have long pointed out that Jefferson had a complicated history with slavery; he worked tireless to undo the system in the United States, but simultaneously owned hundreds of slaves.

By all accounts, he was secretly in love with a slave he owned, Sally Hemings, whom is believed to have given birth to four of his children.

In some of his writings, Jefferson speculated that those of African birth were inferior to those of European birth. On the other hand, Jefferson was against the British-supported Atlantic slave trade — something that is frequently cited in his writings as a reason for America to seek independence — and was behind numerous attempts to end the practice in the United States.

Of course, that’s too nuanced for the alt-left.

“There is only one side to this!” one protester declared while desecrating the statue of a founding father.

Perhaps the protesters should use their time visiting University of Virginia to stop by a library and read a book?

The protest has cleared, but the shroud on the Thomas Jefferson statue at the Rotunda remains. pic.twitter.com/BqYtCEtH5q