Alligator lounging on runway at Air Force base (what!?) - The Horn News 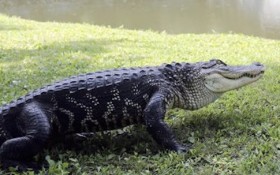 Staff at a U.S. Air Force base in Florida had to bring in a front-end loader to remove an alligator that was lounging on a runway.

The Tampa Bay Times reports that the large reptile was spotted Tuesday morning on a MacDill Air Force Base flight line. The base shared a photo of the creature on Facebook, saying the friendly alligator was just “preparing for take-off.”

MacDill spokesman 2nd Lt. Brandon Hanner says alligator sightings are common around the base, which is located on Tampa Bay. He says the alligator probably surfaced from one the base’s bodies of water.

The wing safety office’s wildlife manager organized the animal’s removal, scooping it into the bucket of the loader.