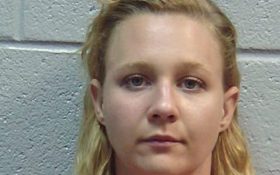 What happens when you raise an entire generation with participation trophies? They grow up free from consequences — and carry that attitude into their adult life.

In fact, even the 25-years-old woman charged with leaking U.S. government secrets is still asking her mom to bail her out of trouble.

Reality Winner, the outspoken liberal accused of betraying her country and leaking classified U.S. data to a liberal newspaper, doesn’t want to face punishment, her parents said Wednesday. They fear prosecutors will seek to use the case to send a tough message to other would-be traitors — and that’s scary.

The family fears Winner will be denied a fair trial if her case becomes “this big thing where we’re not going to tolerate leakers,” Winner’s mother, Billie Winner-Davis, told The Associated Press in an interview.

Winner, a former Air Force linguist who now works as a U.S. government contractor, was arrested Saturday by FBI agents on charges that she made copies of a classified report containing top-secret information and mailed it to an online news organization.

“According to the affidavit filed by arresting FBI agent Justin Garrick, Winner was a contractor with Pluribus International Corporation, who was assigned to a NSA facility in Georgia. She was employed at the facility since February 13, 2017, and has held a Top Secret clearance during that time,” ZeroHedge.com reported.

“Less than a month after she joined, on May 9, 2017, Winner printed and improperly removed classified intelligence reporting, which contained classified national defense information and was dated on or about May 5, 2017 from an Intelligence Community Agency and unlawfully retained it,” ZeroHedge.com continued. “A few days later, Winner then sent the classified material — apparently using the work email associated with her desk computer — to the Intercept.”

A judge has scheduled a hearing Thursday for Winner in U.S. District Court to determine whether to allow her to be released on bond pending trial. She has been jailed in neighboring Lincoln County since her arrest, according to a booking report released by the sheriff.

Winner was active on social media, and used her Facebook page to speak freely about politics, including some nasty opinions on President Donald Trump.

She posted on Facebook three months ago that climate change is a more important issue than health care “since not poisoning an entire population seems to be more in line with ‘health’ care, and not the disease care system that people voted for a soulless ginger orangutan to ‘fix.’”

In one post, she reportedly called the president a “piece of sh*t” and in other identified herself as part of an anti-Trump liberal resistance movement.

Court records say Winner admitted to mailing a copy of the classified report to a news outlet when an FBI agent interviewed her at her home Saturday.