All eyes are on Georgia's Senate elections... - The Horn News 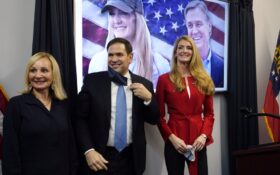 Jon Ossoff took the stage in Columbus and looked out over a parking lot filled with cars, with supporters blaring their horns in approval as he declared that “change has come to Georgia.”

Hours earlier, Republican Sen. Kelly Loeffler stepped to a microphone in suburban Atlanta and addressed hundreds of eager supporters packed into the Cobb County GOP headquarters. The freshman senator and her Florida colleague, Sen. Marco Rubio, stirred the crowd with their insistence that the change offered by Ossoff and his fellow Democratic Senate hopeful Raphael Warnock means “radical elements” would control Washington.

Those opening salvos of Georgia’s twin Senate runoff campaign — Ossoff looking to unseat Republican Sen. David Perdue and Warnock facing off with Loeffler — showcase starkly different approaches the two parties are taking to the unusual circumstances that make this newfound two-party battleground the epicenter of a national battle for control of the Senate.

Both sides are playing to core supporters, the most reliable voters among the 5 million who split their ballots roughly evenly between the two parties in the first round. But for Democrats, it’s seemingly a more piecemeal, voter-by-voter approach, while Republicans are pushing a broad branding message through mass media. Whichever strategy proves more effective on Jan. 5 will help determine the ambitions and reach of President-elect Joe Biden’s tenure depending on which party ultimately controls the chamber.

Republicans need one of the Georgia seats for a majority. Democrats must win both to yield a 50-50 Senate, with would-be Vice President Kamala Harris then holding the tie-breaking vote.

“This is literally the showdown of all showdowns,” Rubio told the Cobb County crowd, many of them not wearing masks as the Florida senator did. “This is Georgia’s decision to make. But it’s America that will live with the consequences.”

Against that backdrop, the Democratic campaigns still are limiting the scope of their in-person events as coronavirus cases spike nationally, observing social distancing and mask protocols just as Biden did in his presidential bid. Meanwhile, they are quietly ramping up voter contact and registration efforts as they try to replicate their record turnout after Biden drew almost 2.5 million votes to lead President Donald Trump at the top of the ticket.

Republicans counter by reflecting their presidential standard-bearer, as well, even after his national defeat. They’re embracing unrestricted in-person events just as Trump spent the closing weeks of the presidential campaign holding his signature mass rallies in battleground states across the country — including two rallies in Georgia. And Republicans are using the events to embrace fully the nationalization of the runoffs, urging voters to see the choice as a simple one: A Senate with New York Democrat Chuck Schumer as majority leader or one with Kentucky Republican Mitch McConnell continuing in that role.

In the days since the runoffs were confirmed, Foster said the campaign has made “tens of thousands of calls” to existing voters while hiring new staffers focused on registering new voters ahead of the Dec. 7 registration deadline. Their targets include an estimated 23,000 young Georgians who reach the legal voting age of 18 between the Nov. 3 general election and the January runoff.

The Democratic campaign also said it has almost 22,000 volunteers scheduled for more than 60,000 hours of volunteers shifts over the next two weeks.

To be sure, Republicans have an expansive campaign infrastructure to reach their voters, as well. But the opening days of the runoff campaign have been dominated publicly, at least, by sweeping attacks, from framing Ossoff and Warnock as too far left to questioning Georgia’s election process with Biden holding a narrow lead for the state’s 16 electoral votes.

Loeffler went so far Wednesday as to accuse Warnock of possessing “a Marxist ideology,” an over-the-top caricature that the Atlanta minister’s campaign spokesman Terrence Clark said was meant to “scare Georgians.” A day before, Loeffler had joined Perdue in a joint statement condemning Georgia’s vote-counting procedures as an “embarrassment” and calling for their fellow Republican, Brad Raffensperger, to step down as secretary of state.

U.S. Rep. Doug Collins, who is leading Trump’s recount effort in Georgia after his own unsuccessful bid for Loeffler’s seat, said Republican voters are staying “fired up because they don’t want to see our country turn to a liberal perspective.”

Democrats, meanwhile, hope the presidential result is a boon for runoff turnout simply because it validates, finally, party leaders’ perennial claim that Georgia is a genuine battleground state. Replicating the feat would run counter to the party’s history in recent decades, with Republicans proving more adept at maintaining enthusiasm for second-round voting.

“You know they say that we don’t show up for runoffs,” former Atlanta Mayor Shirley Franklin told Democrats this week at another Ossoff drive-in rally. “Well, we’re going to prove them wrong.”