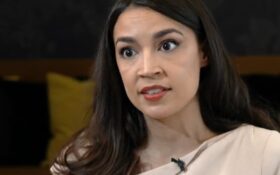 After being confronted by angry protesters at her last town hall, Rep. Alexandria Ocasio-Cortez, D-N.Y., was likely hoping for a warmer welcome by her constituents on Wednesday.

Instead, she got an even more hostile protest.

In fact the protest so stunning, some critics wondered whether Ocasio-Cortez had a “nervous breakdown” during the confrontation.

Ocasio-Cortez laughed and pretended to dance and mock the chant at first.

Ocasio-Cortez repeatedly tried to quiet the protesters. “Respectfully, ma’am, you’re saying, ‘Ask us why’ — Y’all have been talking for 20 minutes, OK?” she said. “We know why. We know why you’re mad. Let’s talk about it.”

At one point, Ocasio-Cortez spotted a vulgar sign held by a man endorsing her 2022 midterm opponent, Tina Forte, R-N.Y.

“Very classy. Thank you, sir,” Ocasio-Cortez said to the man.

Ocasio-Cortez later ran out of the room when the lights suddenly turned off. She was seen on camera huddling in a doorway behind one of her security guards when the lights are put back on.

She comes back and adopted a strange, fake accent while trying to get the crowd to settle —