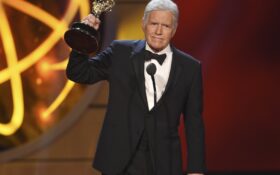 “Jeopardy!” host Alex Trebek is signed through 2022 — but the longtime host, who is battling cancer, said when he retires, he knows who should replace him.

According to TIME, while celebrating his 35th year tenured as the famed host, Trebek had revealed the names of three hosts who he wants to potentially fill his shoes.

“There are so many talented people out there that could do the job,” Trebek said.

His shortlist of replacements makes for a diverse cast of television personalities.

Coates has been a legal analyst for CNN and is a prominent SiriusXM radio host.

And Ben Mankiewicz is a television personality most known for his familial ties to legendary Hollywood producer Joseph Mankiewicz.

Wednesday, a new name was been added to this list.

ABC host George Stephanopoulos, a former Democratic strategist, told SiriusXM’s Howard Stern that he wanted the job. He said “it would be a lot of fun,” to host “Jeopardy!” when Trebek steps down.

Trebek, battling stage 4 pancreatic cancer, will potentially step down ahead of his contract’s end in 2022 if his health doesn’t hold up.

But for now, the legendary game show host has battled back and he remains working as if he’d never missed a beat.

The New York Post is reporting that new episodes of “Jeopardy!” are scheduled to air starting May 18.