Alex Jones faces second trial over this - The Horn News 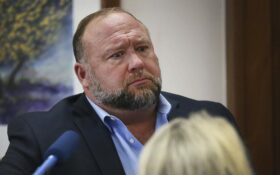 A Connecticut jury began hearing arguments Tuesday in a trial to decide how much money conspiracy theorist Alex Jones should pay relatives of victims of the Sandy Hook Elementary School shooting for spreading a lie that the massacre was a hoax.

The trial is being held in Waterbury, less than 20 miles (32 kilometers) from Newtown, where 26 children and teachers were shot to death in 2012.

More than a dozen family members, including parents of some victims, filed into the courtroom to listen to the opening statements and first day of evidence.

It’s the second such trial for Jones, who was ordered by a Texas jury last month to pay nearly $50 million to the parents of one of the slain children.

A jury of three men and three women along with several alternates will decide how much the conspiracy theorist should pay relatives of eight victims and an FBI agent who responded to the school. Judge Barbara Bellis found Jones liable without a trial last year after he failed to turn over documents to the families’ lawyers.

On Tuesday, she sanctioned Jones for failing to turn over analytic data related to his website and the popularity of his show. She told his lawyers that because of that failure, they will not be allowed to argue he didn’t profit from his Sandy Hook remarks.

Jones did not attend the opening of the trial Tuesday. He said on his show Monday that he would be traveling to Connecticut next week.

The trial is expected to last about a month and feature testimony from both Jones and the families.

Bellis instructed the jury that Jones and his company, Free Speech Systems, have already been found liable for damages to the plaintiffs for calling the shooting a hoax on multiple media platforms and saying that no one died.

The Sandy Hook families and former FBI agent William Aldenberg say they have been confronted and harassed for years by people who believed Jones’ false claim that the shooting was staged by crisis actors as part of a plot to take away people’s guns.

Some say strangers have videotaped them and their surviving children. They’ve also endured death threats and been subjected to abusive comments on social media. And some families have moved out of Newtown to avoid harassment. They accuse Jones of causing them emotional and psychological harm.

Jones, whose web show and Infowars brand are based in Austin, Texas, has been banned from YouTube, Facebook and Spotify for violating hate-speech policies.

Jones now says he believes the shooting was real. At the Texas trial, he testified that he realizes what he said was irresponsible, did hurt people’s feelings and he apologized.

He continues, however, to insist that his comments were protected free speech. He views the lawsuits as efforts to silence him and put him out of business.

Jones’ lawyers say he intends to appeal the judgment against him in Texas. Jones also will face a third trial back in Texas involving the parents of another slain child.