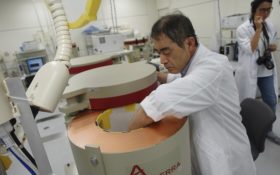 More than six years after a deadly tsunami overwhelmed the Fukushima nuclear power plant, Japan is close to deciding what to do with a million tons of radioactive water.

The toxic water is stored on site in over 900 large and densely packed tanks that could spill should another major earthquake or tsunami strike.

The stalemate is rooted in a fundamental conflict between science and human nature — and one plan has the Japanese slowly pouring the water into the Pacific ocean.

Treatment has removed all the deadly elements except tritium, the government claims, which they say is safe in small amounts.

Local fishermen aren’t sold, thiough. The water has a dirty image for consumers, they say, and carried potential risk. Despite repeated tests showing most types of fish caught off Fukushima are safe to eat, diners remain hesitant to risk radioactive poisoning. The fishermen fear any release would sound the death knell for their nascent and still fragile recovery.

“People would shun Fukushima fish again as soon as the water is released,” said Fumio Haga, a drag-net fisherman from Iwaki, a city about 30 miles down the coast from the nuclear plant.

And so the tanks remain.

Fall is high season for saury and flounder, among Fukushima’s signature fish. It was once a busy time of year when coastal fishermen were out every morning.

Then came March 11, 2011. A 9 magnitude offshore earthquake triggered a tsunami that killed more than 18,000 people along Japan’s northeast coast. The quake and massive flooding knocked out power for the cooling systems at the Fukushima nuclear plant. Three of the six reactors suffered partial meltdowns. Radiation spewed into the air, and highly contaminated water ran into the Pacific.

Today, only about half of the region’s 1,000 fishermen go out, and just twice a week because of reduced demand. They participate in a fish testing program.

Lab technicians mince fish samples at Onahama port in Iwaki, pack them in a cup for inspection and record details such as who caught the fish and where. Packaged fish sold at supermarkets carry official “safe” stickers.

Fewer Japanese consumers shun fish and other foods from Fukushima than before, but one in five still do, according to the survey. The coastal catch of 2,000 tons last year was 8 percent of pre-disaster levels. The deep-sea catch was half of what it used to be, though scientists say there is no contamination risk that far out.

Naoya Sekiya, a University of Tokyo expert on disaster information and social psychology, said that the water from the nuclear plant shouldn’t be released until more information is available.

“A release only based on scientific safety, without addressing the public’s concerns, cannot be tolerated in a democratic society,” he said. “A release when people are unprepared would only make things worse.”

He and consumer advocacy group representative Kikuko Tatsumi sit on a government expert panel that has been wrestling with the social impact of a release and what to do with the radioactive waste water for more than a year, with no sign of resolution.

The amount of radioactive water at Fukushima is still growing, by 150 tons a day.

The reactors are damaged beyond repair, but cooling water must be constantly pumped in to keep them from overheating. That water picks up radioactivity before leaking out of the damaged containment chambers and collecting in the basements.

There, the volume of contaminated water grows, because it mixes with groundwater that has seeped in through cracks in the reactor buildings. After treatment, 210 tons is reused as cooling water, and the remaining 150 tons is sent to tank storage. During heavy rains, the groundwater inflow increases significantly, adding to the volume.

The water is a costly headache for Tokyo Electric Power Co., the utility that owns the plant. To reduce the flow, it has dug dozens of wells to pump out groundwater before it reaches the reactor buildings and built an underground “ice wall” of questionable effectiveness by partially freezing the ground around the reactors.

Another government panel recommended last year that the utility, known as TEPCO, dilute the water up to about 50 times and release about 400 tons daily to the sea — a process that would take almost a decade to complete. Experts note that the release of radioactive tritium water is allowed at other nuclear plants.

Tritium water from the 1979 Three Mile Island accident in the United States was evaporated, but the amount was much smaller, and still required 10 years of preparation and three more years to complete.

Some experts have proposed moving the tanks to an intermediate storage area, or delaying the release until at least 2023, when half the tritium that was present at the time of the disaster will have disappeared naturally.