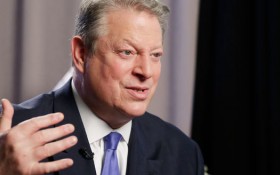 Former Vice President Al Gore is back in the spotlight — and this time, it’s to bash President Donald Trump and demand that he be tossed out of office over wild accusations.

The former vice president threw himself into the Democrats’ fevered impeachment debate, saying that the Trump administration “should be terminated early for ethical reasons” — because Trump is causing natural disasters.

“You know, in science and medicine some experiments are terminated early for ethical reasons,” Gore went on.

The Democrats are currently trying to quiet down messages that they will impeach Trump if they win the majority in Congress during this November’s midterms – but Gore, who knows a thing or two about impeachment, let the secret slip.

Gore, who’s been known to exaggerate, compared Trump-era America to the kingdom of the Antichrist.

“Every night on the television news is like a nature hike through the book of Revelation,” he said

That’s a line he uses over and over again – including the last time he told Trump he should quit.

Last month, an interviewer asked if Gore had any advice for the president.

“My only message would be: Resign,” Gore said before giggling. “I don’t mean to be flippant about it.”

“They’ve made the EPA the CPA – the Coal Production Agency!” said Gore, defending the left-wing environmental regulations have been bankrupting the U.S. coal industry.

But there may be another, secret reason Gore is so hot under the collar: Trump met with Al Gore – then totally ignored the vice president and his badgering advice.

Gore owned up to the fact that he met with Trump after the 2016 election, where he tried, and failed, to convince Trump to break his campaign promises about the environment.

Trump campaigned on breaking our dependence on foreign oil by revving up U.S. production and reviving the U.S. coal industry – but Gore wanted him to put the screws to his voters once he was in office.

He told HBO’s “Real Time with Bill Maher” that the president’s daughter, Ivanka, invited Gore to meet the president-elect in Trump Towers in December 2016.

“I thought, actually, there was a chance he might come to his senses,” Gore said last year.

The “conversation continued after he went into the White House,” Gore said.

But Trump ignored Gore’s pestering and kept his word to the voters – and it helped the U.S. pull off a massive economic revival.

Trump pulled out of the Paris Climate agreement, cut radical Green regulations, and watched U.S. oil and coal start roaring back to life.

That’s made America great again — and it has left Gore steaming mad.