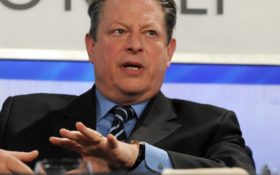 Al Gore is taking his show on the road – and for once, his climate alarmism isn’t being funded by hard-working American taxpayers.

Nope, this time he’s living high on the hog off a whole new set of taxpayers!

Gore was in Australia for an event paid for – willingly or not – by local taxpayers.

And he’s NOT cutting them any discounts.

Despite Australia ranking higher than the United States on the so-called “Environmental Performance Index,” Gore’s visit will cost them big: Fox News said local government in Queensland is paying $100,000 for a Climate Reality Project “training conference.”

While tax dollars weren’t used to pay Gore himself, it was used to rent out the facilities and hire staff for the event.

Many thousands more raised from other sources will pay other expenses, likely including Gore, with one report in Australia putting the total cost at $225,00 (or $320,000 Australian.)

“It is not believable that the Queensland government can be so awash with money as to bring this hypocrite Al Gore to Australia for a conference,” Australian radio host Alan Jones said. “When so many important instruments of government are underfunded, when farmers can’t feed their cattle in Queensland, and $320,000 goes to waste on this shonk.”

And if that cash is an injury to those taxpayers, Gore has also brought along some insult to go along with it: The trip was a not-so-veiled mission to scold Australians for having the nerve to build a coal mine in their own country.

He’s there to argue against the planned Adani mine in Queensland, saying that part of the intention – to sell Australian coal to India – is flawed given that India has rushed to embrace solar, with 225 gigawatts of solar capacity under construction there right now.

“They are not going to continue with coal. You want to sell coal to India?” the former vice president sneered. “Good luck with that!”

Gore, to no surprise, is wrong.

India is indeed adding massive solar capacity and will continue to do so. However, the total demand for energy is massive – and continues to grow.

The International Energy Agency predicts that coal, currently 74 percent of the nation’s total energy, will drop to 57 percent in 2040.

But between now and then, the demand for coal in India will actually double, according to estimates from BP cited by Inside Climate News.

And someone has to sell it to them!

Even in 2040… assuming all the renewable projects remain on schedule and they hit every target… having 57 percent of the nation’s energy from coal means there will still be an incredible amount of demand.

Australia’s mine is perfectly positioned to meet it, now and in the future.

In other words, that region of Australia could enjoy an economic boom… and all they have to do there is what Americans have done here: Ignore Al Gore.

Even for people who believe in the need to take more urgent action against climate change, Gore sits as a bad personal example who’s been called out repeatedly for hypocrisy.

He’s notorious for having a massive energy-hogging home. In 2007, it was reported that he used between 12 and 20 times the energy of the average American home, something his supporters tried to justify by claiming it also served as his home office.

Must be some office!

Facing scrutiny, he renovated the home with solar panels and other sources of “green” energy.

But a report in 2017 found he’s still using enough power to light up an entire neighborhood!

The National Center for Public Policy Research found that in Sept. 2016, the Gore home consumed 30,993 kWh – or as much power as the average American family uses in 34 months.

In one year, his home sucks up enough juice to power the average American home for 21 years.

And the 33 solar panels he paid $60,000 to install provide only enough energy to deliver 5.7 percent of his typical monthly power needs.

But hey, there are always other options: The former vice president can switch to coal.