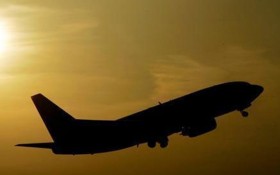 Terror in the skies – Authorities say an American Airlines flight from Phoenix to Boston has been diverted to Syracuse, New York, after the captain became ill and later died.

Airline spokeswoman Andrea Huguely says Flight 550 was diverted shortly after 7 a.m. Monday and the first officer safely landed the plane with 147 passengers and five crew members onboard. She confirmed that the flight’s captain had died.

Details of the medical emergency and the identity of the deceased pilot weren’t immediately released. It also wasn’t immediately clear when the pilot died.

Before the flight landed at Syracuse, the first officer called the airport tower and said “American 550. Medical emergency. Captain is incapacitated.” He requested a runway to land.

The plane later completed its leg to Boston.