The flood continues: EU to take on another 120,000 migrants - The Horn News 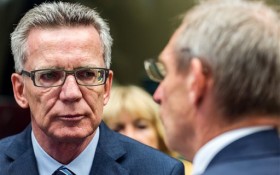 European Union ministers agreed Tuesday to relocate 120,000 migrants in a move intended to ease the strain on nations like Greece and Italy which are on the frontline of the continent’s overwhelming migrant crisis.

But in a sign of deep-rooted divisions among EU members, the ministers who often reach decisions by consensus had to put the plan to a vote.

Milan Chovanec, the Czech interior minister, tweeted that the proposal was approved but that the Czechs, Slovaks, Romanians and Hungarians voted against it and Finland abstained.

French Interior Minister Bernard Cazeneuve called the agreement “an important step” that was approved by a “crushing majority” of the 28 ministers present.

“We are doing this out of solidarity and responsibility, but also in our own interest,” he said. “At the moment, something like 50 percent of those who are arriving in Greece are coming to Germany. With a quota of 26 percent, fewer of this group would come.”

De Maziere said the deal also aims to cut “secondary migration” in which people move from one country to another within Europe.

While the ministers talked in Brussels, migrants scuffled with police at a transit camp in Croatia, and nations in southeast Europe scolded and threatened each other as the unrelenting flow of asylum-seekers raised diplomatic tensions to a boiling point.

Meanwhile, the United Nations’ refugee agency said the next few days may be the last chance for a coherent European response as hundreds of thousands flow from war-torn areas in the Middle East, Africa and Asia to Europe.

The U.N. High Commissioner for Refugees warned that the proposal on the table isn’t enough to stabilize the situation, because 477,906 people have already entered Europe by sea this year. It urged the EU to quickly set up facilities in Greece, where tens of thousands have arrived after making the hazardous sea crossing from Turkey.

This may be “the last opportunity for a coherent European response,” said Melissa Fleming, a spokeswoman for UNHCR.