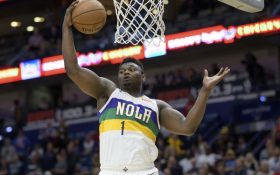 The marketing agent who has sued NBA rookie Zion Williamson wants the former Duke star to answer questions about whether he received improper benefits before playing his lone season with the Blue Devils.

Prime Sports Marketing and company president Gina Ford filed a lawsuit last summer in a Florida court, accusing Williamson and the agency now representing him of breach of contract. That came after Williamson had filed his own lawsuit a week earlier in North Carolina to terminate a five-year contract with Prime Sports after moving to Creative Artists Agency LLC.

In a court filing last week in the Florida lawsuit, Ford’s attorneys submitted a list of questions that include asking whether Williamson or anyone on his behalf had sought or accepted “money, benefits, favors or other things of value” to sign with Duke.

The filings — which offer no evidence of wrongdoing by Williamson or his family — seek answers within 30 days to establish facts under oath in the pretrial discovery process.

The questions reference Williamson’s mother and step-father as well as apparel companies Nike – which outfits the Blue Devils team – and Adidas. The questions include whether he received any improper benefits from an agent between January 2014 and his April 2019 announcement that he would go pro.

In a filing Friday in the North Carolina suit, Ford’s attorneys say Williamson or people on his behalf had “engaged in conduct that rendered … him ineligible to be or remain a student-athlete” before Williamson had met Ford to discuss endorsement deals. It offers no specific evidence for the claim.

Duke spokesman Michael Schoenfeld declined to comment on the filings since the school isn’t a party to either lawsuit. Schoenfeld also referred to a previous statement that the school has reviewed Williamson’s eligibility and found no concerns.

“As soon as Duke was made aware of any allegation that might have affected Zion Williamson’s eligibility, we conducted a thorough and objective investigation which was directed by individuals outside the athletics department,” he said in January. “We found no evidence to support any allegation. Zion thrived as both a student and an athlete at Duke, and always conducted himself with integrity and purpose.”

An email from The Associated Press requesting comment from Williamson’s agents at CAA, Austin Brown and Lisa Joseph-Metelus, was forwarded to Jeremy Watkins, a spokesman for Williamson attorney Jeffrey Klein. Watkins referred questions to Duke’s statement and declined additional comment. Both Brown and Joseph-Metelus are named as individual defendants in Ford’s lawsuit.

The legal battles surrounding the No. 1 overall NBA draft pick also include another Florida lawsuit, this one filed in April by a former college basketball player.

According to the lawsuit, Cedriquze Johnson said Prime Sports failed to provide agreed-upon compensation for his “instrumental” work in facilitating a relationship between Prime Sports and Williamson’s family “within the confines of NCAA eligibility regulations.” Williamson is not named in Johnson’s lawsuit.

Johnson had a relationship with Williamson’s family dating to the 6-foot-7, 285-pound prospect’s high school career, according to the lawsuit.