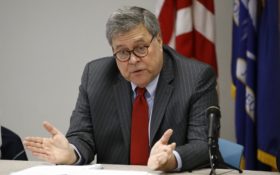 Attorney General William Barr will announce a nationwide plan on Friday to address the crisis of missing and murdered indigenous people as concerns mount over the level of violence they face.

Barr will announce the plan, known as the Missing and Murdered Indigenous Persons Initiative, during a visit with tribal leaders and law enforcement officials on the Flathead Reservation in Montana.

A report released last year by the Urban Indian Health Institute said there were 5,712 cases of missing and murdered indigenous girls in 2016, but only 116 of those cases were logged in a Justice Department database. The National Institute of Justice estimates that 1.5 million Native American women have experienced violence in their lifetime, and more than 50 percent of Native American women experienced sexual violence.

The Justice Department’s new initiative would invest $1.5 million to hire specialized coordinators in 11 U.S. attorney’s offices across the U.S., who would be responsible for developing protocols for a more coordinated law enforcement response to missing persons cases.

Tribal or local law enforcement officials would also be able to call on the FBI to help in some missing indigenous persons cases. The FBI could then deploy some of its specialized teams, including investigators who focus on child abduction or evidence collection and special agents who can help do a quick analysis of digital evidence and social media accounts.

The Justice Department is also committing to conducting an in-depth analysis of federal databases and its data collection practices to determine if there are ways to improve the collection of data in missing persons cases.

“American Indian and Alaska Native people suffer from unacceptable and disproportionately high levels of violence, which can have lasting impacts on families and communities,” Barr said in a statement. “Too many of these families have experienced the loss of loved ones who went missing or were murdered.”

Federal prosecutors in Montana are also bringing public training to reservations in the state, teaching people how to find missing loved ones.

Tribal police and investigators from the federal Bureau of Indian Affairs generally serve as law enforcement on reservations, which are sovereign nations. But the FBI investigates certain offenses and, if there’s ample evidence, the Justice Department prosecutes major felonies such as murder, kidnapping and rape if they happen on tribal lands.