After going to space on TV, Snoopy goes to space for real - The Horn News 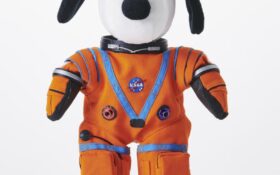 A new rocket designed to launch humans to the moon, Mars and beyond will launch next year from Kennedy Space Center in Florida. On board, will be a familiar fuzzy figure — Snoopy.

A 5-ounce plush toy version of the daydreaming beagle — wearing a space suit designed according to NASA’s strict specifications — has an important job for the Artemis I unmanned mission.

NASA uses stuffed animals on flights because when the little guys start to float, it indicates that the spacecraft has entered space’s zero gravity. Since the toys are soft and light, they won’t break anything or accidentally strike a button.

The Artemis I mission is scheduled to circle the moon and then return to Earth in February as a dry run without astronauts, making sure all systems are working for future crewed missions. Also aboard will be two Lego figurines, part of an educational series.

The upcoming mission announcement coincides with the release Friday of the second season of “Snoopy in Space,” the Emmy-nominated animated series on Apple TV+. Season one saw Snoopy become an astronaut and land on the moon. Season two sees him go further in what showrunner Mark Evestaff calls an “epic road trip.”

“We have taken a bit of a step further so that Snoopy is able to go to some of these places that we haven’t been, like Mars or the moons of Jupiter or visiting an exoplanet,” he says. “And he does it through his imagination, but it’s also based on actual science from NASA.”

Stephanie Betts, chief content officer at media company WildBrain, said season one was the perfect foundation. “Snoopy became an astronaut and was able to go to space. Well, now what do you do with that? Well, let’s go explore. Let’s have that search for life.”

Back closer to home, the plush Snoopy’s gravity-monitoring task — it’s officially called the zero gravity indicator — will be far from the first stuffed toy used by astronauts. Soviet cosmonaut Yuri Gagarin, the first human in space, had a small doll when he launched on Vostok 1.

Since then, an owl doll and an Angry Birds toy have been on the International Space Station, a plush R2-D2 was used as the talisman on a Soyuz mission in 2015 and a stuffed snowman Olaf from the movie “Frozen” has gone up. A plush Snoopy has also been on the space station.

Snoopy has a long history with NASA, starting when the Apollo X astronauts Thomas Stafford, John Young and Gene Cernan chose “Peanuts” characters as nicknames — the command module was called Charlie Brown, and the lunar module was Snoopy.

“Someone had the idea of trying to bring more interest into the space program. By the time they got to Apollo 10, they felt that the program was going to become a little stale,” said Craig Schulz, son of “Peanuts” creator Charles Schulz. “For my dad, it was probably one of the biggest, if not the biggest honor, that could ever be bestowed upon his comic strip.”

Charles Schulz, for his part, drew strips with Snoopy walking on the lunar surface. “I did it! I’m first beagle on the moon! I beat the Russians… I beat everybody… I even beat that stupid cat who lives next door!” says Snoopy in one.

NASA and “Peanuts” have frequently been interwoven. The space agency honors its best employees with the Silver Snoopy Award, and a Snoopy doll was aboard Boeing’s CST-100 Starliner spacecraft in 2019.

The plush 10-inch-by-7 inch Snoopy that is being readied for the Artemis I mission was not the kind you’d find on a Target shelf. It’s a one-of-a-kind work and painstakingly designed using only NASA-approved materials. Stress-testing it is due in December.

In many ways, the reuniting of Snoopy and NASA in 2021 mirrors the way the two initially worked together to generate interest in space exploration.

“Space travel is almost become so normalized now,” said Schulz. “People’s attention span is a little weak, for the most part. So when you inject some of that entertaining Snoopy, you’re going to capture the audience.”