Is Afghanistan on the verge of collapse? - The Horn News 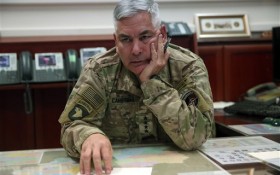 The Taliban is on the rise, and they’re leaving behind a bloody wake. Violence in the war-torn country of Afghanistan is increasing, according to a new Pentagon report to Congress that says the Taliban was emboldened by the reduced U.S. military role and are likely to try to build momentum from their 2015 attack strategy.

The number of effective insurgent attacks rose this year, causing increased casualties among Afghan security forces, the report said. It said that while Afghan forces have demonstrated a will to fight and to learn from their battlefield mistakes, the Taliban’s resilience has made the security situation fragile in key areas and at risk of deteriorating in other places.

The report, the latest in a series of regular Pentagon updates on the war effort, also said the Taliban-led insurgency has been emboldened by the U.S. transition from direct combat operations to a train-and-advise role.

“The resilient Taliban-led insurgency remains an enduring threat to U.S., coalition, and Afghan forces, as well as to the Afghan people,” the report said.

The report also said al-Qaeda, which used Afghanistan as a base from which to launch the Sept. 11, 2001 terrorist attacks, has a “sustained presence” in eastern and northeastern Afghanistan and remains a threat to the United States.

Security is threatened by a host of insurgent and extremist networks, including the Taliban, the Haqqani Network, and to a lesser extent al-Qaida as well as an Islamic State affiliate that the report said is openly fighting with the Taliban for establishment of a safe haven.

In an Associated Press interview Tuesday in Kabul, Gen. John F. Campbell, the top American commander in Afghanistan, said “foreign fighters” from Syria and Iraq who are supports of the Islamic State are trying to establish a base in the eastern city of Jalalabad. He said there also are indications that these IS supporters in Nangarhar province are trying to consolidate links with Islamic State leadership in Syria and Iraq.

The biggest setback during the period covered by the Pentagon report was the Taliban’s brief takeover of the northern city of Kunduz, which Afghan forces abandoned abruptly in late September but recaptured several days later with U.S. military help.

It was during the battle for control of Kunduz that a U.S. AC-130 gunship repeatedly attacked a hospital run by the international medical charity, Doctors Without Borders, which says 42 patients and others were killed in the assault. The U.S. military has said the attack was a mistake caused by a combination of human error, technical faults and other circumstances.