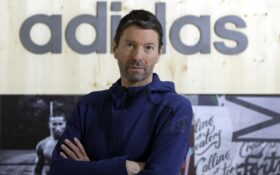 Adidas CEO Kasper Rorsted will step down next year, the sports apparel maker said Monday, and the company has started looking for a successor.

Rorsted, who has been CEO since 2016, and its supervisory board “mutually agreed” that he will hand over during the course of 2023, the Herzogenaurach, Germany-based Adidas said.

“After three challenging years that were marked by the economic consequences of the COVID-19-pandemic and geopolitical tensions, it is now the right time to initiate a CEO transition and pave the way for a restart,” supervisory board chairman Thomas Rabe said in a statement.

He thanked Rorsted for “major achievements” that included strategically repositioning the company, vastly expanding its online sales and doubling sales in North America. Rabe said the firm can now focus on its core brand after divesting TaylorMade, Reebok and CCM Hockey.

Recent years “have been marked by several external factors that disrupted our business significantly” and that it took “huge efforts” to deal with those challenges, Rorsted said.

“This is why enabling a restart in 2023 is the right thing to do — both for the company and me personally,” he added.