60 million expected to get snow across America - The Horn News 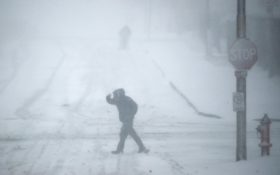 Approximately 60 million Americans are expected to be hit by snow and arctic weather this week.

Snowfall in the Midwest is taking its toll on air travel in Chicago as one plane trying to land at O’Hare International Airport slid off the runway.

The city’s aviation department says more than 440 flights in and out of the airport have been canceled.

None of the 38 passengers and three crew members aboard an Envoy Air flight from Greensboro, North Carolina, were hurt when the plane slid off the runway at about 7:45 a.m. Monday.

Besides the flights canceled at O’Hare, snow and ice have forced airlines to cancel more than 90 flights at Chicago’s Midway International Airport.

The National Weather Service expects as much as 6 inches of snow in Illinois and up to 10 inches in northwest Indiana and southwest Michigan.

In New England, the wintry mix is a prelude to the coldest temperatures so far this season.

Parts of central and northern Vermont are forecast to get 6-12 inches of snow Monday night and Tuesday. Meteorologist William Watson of the National Weather Service says that 5 to 9 inches of snow could fall in far northern New Hampshire, and parts of the western Maine mountains. Other areas will see an inch or two, with freezing rain along the coast.

Then the cold air arrives.

Watson said the temperature will dip into the single digits Tuesday night in the northern half of Maine and New Hampshire. The cold temperatures will continue Wednesday before warming a bit later in the week.

Out west, snow and bitter cold is expected across much of Nebraska and Iowa at the start of the work week.

Cold temperatures are expected to follow the snow on Monday.

Temperatures are expected to drop into the teens Monday morning and winds up to 30 mph are expected.

The wind may create blowing snow and wind chills around 0 degrees.