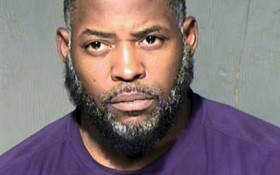 Prosecutors on Wednesday grilled an Arizona man charged with plotting an attack on a Prophet Muhammad cartoon contest in Texas about why he never told investigators that his friend who carried out the thwarted shooting had been watching Internet videos of people being beheaded.

Abdul Malik Abdul Kareem took the witness stand for a second day at his trial on charges that he planned the attack last spring in a Dallas suburb. Prosecutors asked him about two friends who were killed in a police shootout outside the May 3 event.

Kareem acknowledged he volunteered to investigators that he kicked Elton Simpson out of his home because he believed Simpson had planted a tracking device in his car.

Prosecutor Joseph Koehler asked why Kareem didn’t think it was important to tell investigators, who interviewed him twice after the attack, about the videos Simpson had been watching.

Kareem is charged with conspiring to provide material support to the Islamic State group and is one of the first Americans to stand trial on charges related to the terrorist group. He also is charged with lying to the FBI in his interviews.

The 44-year-old moving company owner underwent questioning Tuesday about whether he was told that friends Simpson and Nadir Soofi also were planning to attack a military base in Arizona.

At first, Kareem said a mutual friend mentioned something vague about such a plan, but Kareem later said he wasn’t paying attention when the comment was made.

Koehler asked whether such a plan would have been worth mentioning to FBI agents during an interview about the Texas attack.

“I didn’t think it was anything,” Kareem responded.

Kareem told jurors that he met Simpson and Soofi at Soofi’s pizza restaurant in northwest Phoenix in 2011. The three attended the same mosque.

He also described his rift with Simpson. He said he strongly disapproved of Simpson using Kareem’s laptop to watch al-Qaida promotional materials.

“I did not want it in my house,” Kareem said, adding that they eventually reconciled.

At one point, he wiped his eyes with a tissue as he recounted an apology Simpson made after standing him up for dinner two days before the attack in Garland, Texas.

Defense lawyers claim the government is using guilt through association to target Kareem.

On the witness stand, he denied the government’s allegation that he asked a one-time roommate if he knew how to make a pipe bomb.

Prosecutors say Kareem inquired about the types of explosives needed to blow up a mall and the stadium in metro Phoenix where the 2015 Super Bowl was held.