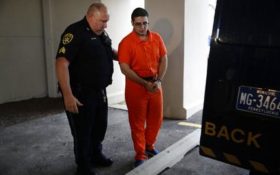 Bucks County, Pennsylvania is normally known for it’s charming covered bridges and charming fall foliage — but this week, a series of murders has sent shock waves through the sleepy Philadelphia suburbs.

The details of the slayings and the mass grave the bodies were found in are disturbing.

A person with first-hand knowledge of a Cosmo DiNardo’s confession to the murder of four missing Pennsylvania men says DiNardo killed them individually after selling them marijuana.

According to the source, DiNardo burned the bodies after he’d killed them — and discarded the remains in a mass grave on his family farm.

The person spoke to The Associated Press on the condition of anonymity because he wasn’t authorized to publicly discuss details of the case. The person says a co-conspirator was involved in three of the killings.

The details were provided after one of DiNardo’s lawyers said Thursday that DiNardo had confessed to murdering the missing men.

Authorities found the body of one of the men, 19-year-old Dean Finocchiaro, buried in a suspected mass grave in Solebury Township farm. The other men missing are 22-year-old Mark Sturgis, 21-year-old Tom Meo and 19-year-old Jimi Tar Patrick.

Bucks County District Attorney Matthew Weintraub said at a Thursday morning news conference that the 12½ -foot-deep mass grave on the Solebury Township farm is getting deeper by the minute.

He also asked the public to keep sending in tips that could lead them to the bodies.