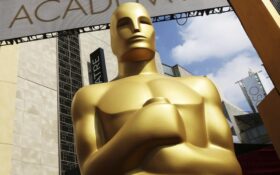 Bill Kramer has been thinking about the future of the Oscars since he was named CEO of the Academy of Motion Picture Arts and Sciences earlier this summer.

The former head of the Academy Museum of Motion Pictures knows some things must change, that they have to evolve and grow their fanbase. But he’s optimistic: He’s already deep in talks with Oscars broadcaster ABC and potential producing partners and is committed to having a host again in 2023. And he’s especially ready to “move forward” from the slap and to have a show that celebrates cinema, he told a small group of reporters this week. At the Oscars earlier this year, Will Smith came on stage and slapped Chris Rock.

The show is immensely important not just for Hollywood but for the academy itself. The revenue from the Oscars accounts for well over half of the organization’s annual income. And it’s been under increasing scrutiny from both the public, for everything from its runtime to the kinds of films that get nominated, and its broadcasting partner for its ratings. Even academy members themselves have drawn criticism, most recently for the decision to present some of the awards before the live broadcast in an effort to streamline the show.

At the next Oscars in March 2023, Kramer said he wants to see “all crafts equitably acknowledged” on the show and that “there are many ways to do that.” It’s just one of the many topics being discussed with broadcaster ABC.

One of the evergreen conundrums is how to attract new viewers and appeal to the masses without alienating the ones who love the Oscars the most. Efforts to infuse the show with more mainstream movies from the “fan favorite” award earlier this year or the short-lived “popular” Oscar have been mercilessly mocked. To some, montages are a waste of time. To others, they’re the heart of the Academy Awards.

“We have been talking to ABC, our partners on the show, and really thinking about what this year means for us,” Kramer said. “It’s our 95th anniversary. We want to return to a show that has a reverence for film and 95 years of the Oscars. It’s a moment to really reflect on our membership, all craft areas, our changing industry, our fans. There are ways to do that that are entertaining and authentic and that are tied to our mission to honor excellence in moviemaking. I don’t think that’s mutually exclusive.”

Part of that strategy, Kramer said, is using social media and marketing to create more familiarity around first-run movies leading up to nominations and the awards. The hope is that come Oscar night, audiences and academy members are invested whether “Top Gun: Maverick” is nominated or not.

They are also making progress in selecting producers for next year’s show. For the past several years, producers have changed with each show, but Kramer said he hopes to forge a multi-year partnership with people who have expertise in live television production. Asked for some examples of past Oscars that have worked, Kramer cited the Bill Condon-produced 81st Oscars with Hugh Jackman as host, as well as the Donna Gigliotti-produced 91st Oscars, which he said was “efficient and successful.”

But a focus on the Oscars show doesn’t mean he’s not working to advance the academy’s diversity initiatives, from its membership to its year-round talent development programs. Starting next year, best picture hopefuls will have to meet the Academy’s new inclusion standards for the 96th Academy Awards in 2024. The organization has been working with studios and filmmakers for the past two years to ensure that everyone understands the standards. He said all the best picture nominees from earlier this year would have qualified.

“We don’t want to legislate art, that’s not what this is about. We want filmmakers to continue to make the films they want to make,” Kramer said. “We don’t want this to be onerous or punitive. We want this to be collaborative. Seeing that the best picture nominees of this past year all qualify gives us great hope that our conversations and partnership with studios and distributors and filmmakers is working and is not creating a challenge.”

One of Kramer’s primary concerns is continuing to diversify the academy’s revenue base. At one time, the Academy Awards and all the contracts that surround the Oscars show made up 95% of the organization’s annual income. Now, with the Academy Museum of Motion Pictures and its ticket sales, retail store and restaurant combined with corporate sponsorships, foundation support and individual giving, the Oscars now make up around 70% of that income. They’ve forged successful partnerships with the likes of Rolex and Bloomberg Philanthropies, who “believe in the future of the arts and culture and cinema,” Kramer said.

“We brought in more than $20 million last year tied to the museum in new revenue. How do we build upon that success connected to the academy to create diversified streams of support?” Kramer said. “That doesn’t keep me up at night in a negative way, but I’m excited about what that means because it will help ensure the future of the academy.”

The 95th Academy Awards will be broadcast live from Los Angeles on March 12.