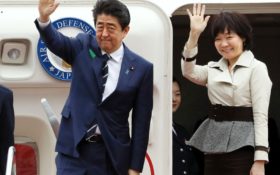 Before boarding his flight from Tokyo, Abe took the unusual step of pledging to clean up the mess in government when he gets back. “As head of the government, I’m committed to deal with every single problem responsibly to uncover the truth and squeeze out the pus,” he said.

Abe’s meetings with Trump may provide a brief respite from his problems at home and could even stem the slide in his popularity. The two leaders plan to golf, as at their two previous summits.

But this round of talks may prove more challenging than the first two. Abe will have to overcome policy divisions on trade and potentially North Korea that have emerged in Trump’s second year in office. A poor summit showing could further undermine Abe’s position at home.

The Japanese leader’s approval ratings have declined to below 30 percent in some polls as Abe has been hit by accusations of cronyism and the mishandling of official documents by several ministries. That contrasts with the 50 percent approval rating he enjoyed at the time of his Tokyo summit with Trump in November, soon after leading his ruling party to a landslide election victory.

A school land deal scandal linked to Abe’s wife re-erupted in March after a newspaper revealed that Finance Ministry officials had altered documents related to the school’s purchase of state land at a huge discount. Abe has denied that he or his wife intervened in the sale.

Then, a second allegation of favoritism resurfaced, in which a friend of Abe got permission to establish a new veterinary school in western Japan. Abe weathered both scandals last year, but the discovery of new evidence has reignited the charges.

Separately, the Defense Ministry has acknowledged mishandling documents related to a former peacekeeping mission in South Sudan, and a top Finance Ministry official has been accused of sexual harassment.

The mounting scandals have called into question Abe’s chances of securing a third term as party leader this September, which seemed assured earlier this year, and could even force him to step down before the leadership race. Other party leaders with an eye on the premiership are ready to pounce should Abe fall, though he has bounced back from setbacks before.

Abe’s aides hope that the meeting with Trump will showcase the leaders’ close personal relationship, as the two summits last year did.

“While playing golf, they can take time and exchange views on a range of issues while deepening their relationship of trust,” Chief Cabinet Secretary Yoshihide Suga said at a regular briefing Tuesday.

Trump surprised Abe, and much of the world, when he announced that he would meet North Korean leader Kim Jong Un. That summit is expected in May or early June.

Abe will want to make sure Trump doesn’t cut a deal with North Korea that leaves Japan exposed to shorter-range missiles that do not threaten the U.S. mainland. He also is expected to ask Trump to raise with Kim the issue of Japanese abducted by North Korea in the 1970s and 1980s.

Yu Uchiyama, a political science professor at the University of Tokyo, said Abe will try to make sure the two leaders are on the same page on North Korea.

“Mr. Abe wants to confirm their cooperation and eliminate the image that Japan is left out of the loop,” he said. “He is also seeking to achieve a diplomatic result in hopes of turning around his public support.”

But Trump is unpredictable, Uchiyama said, and an unfavorable outcome could damage Abe further.

Abe also will likely seek a reversal of the decision not to exclude Japan from new steel and aluminum tariffs, while resisting Trump’s attempts to pull Japan into bilateral trade negotiations.

Japanese officials said Abe and Trump might also discuss the Trans-Pacific Partnership, after Trump indicated last week that the U.S. might be interested in rejoining what is now an 11-country trade agreement. Trump pulled the U.S. out of TPP shortly after his inauguration in early 2017.