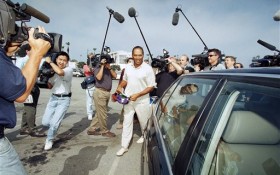 LOS ANGELES (AP) — ABC News apologized for promoting as an “exclusive” a videotape of O.J. Simpson that NBC had aired 15 years ago.

In a statement issued Friday, ABC said it had the wrong impression that video footage from a 1990s civil suit deposition given by Simpson had not aired before at length. But NBC’s “Dateline” had broadcast video from the deposition in 1999.

The tapes were part of ABC’s “20/20” broadcast that aired Friday after being heavily promoted by the network as including “never-before-seen videos” of Simpson being questioned about the killings of his ex-wife, Nicole Simpson, and her friend Ron Goldman.

The former football star and actor, who had been acquitted in 1995 of criminal charges in the deaths, was found liable by a jury in the 1997 lawsuit.

ABC’s report, which had been previewed on “Good Morning America,” included video from documentaries scheduled to air on cable channels A&E and LMN.

“Dateline” took to Twitter to debunk ABC’s claim of exclusivity, tweeting that “Good Morning America” was “partying like it’s 1999!”

In turn, ABC tweeted “we were wrong, but it’s still a good show! Be sure to watch!”