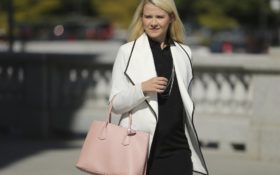 Utah kidnapping and rape survivor Elizabeth Smart said Thursday that she was sexually assaulted on an airplane last year while she was sleeping.

Smart, now a 32-year-old mother of three, referenced her kidnapping from her Salt Lake City home in 2002 in describing her reaction to the attack to “CBS News This Morning.” She said she was asleep during a flight when the man next to her began rubbing her inner thigh with his hand.

“The last time someone touched me without my say-so was when I was kidnapped, and I froze,” she said.

She said the man said nothing. Smart later reported the attack to authorities and said she wants to prevent the man from preying on others.

He said it’s being investigated by the FBI and Delta.

“I called up my husband and I was like, ‘Do I just have a big badge on my forehead that says ‘Easy Prey’ or ’Victim?’” Smart told CBS. “Because I’m sick of it.”

In 2002, Smart was held captive and repeatedly sexually assaulted for nine months before she was rescued. After last year’s flight, she said she began training in self-defense, and now runs a program to train other women and girls.

Delta spokesman Anthony Black emailed a company statement that said Delta is cooperating with the investigation.

“Following her flight, Elizabeth Smart contacted Delta and shared that another passenger had acted inappropriately towards her,” the statement said. “We took the matter seriously and have continued to cooperate with Ms. Smart and the appropriate authorities as the matter is investigated. Delta does not tolerate passenger misconduct towards other customers or Delta employees.”

FBI spokeswoman Sandra Barker said she could not confirm or deny that an investigation exists.