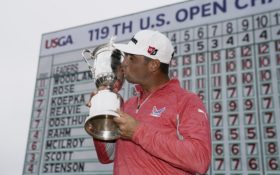 Very soon, Gary Woodland will be a father of three, and odds are he’ll answer the same way about the kids as he will about the three shots that cemented him in as a U.S. Open champion.

Which is his favorite? They’re all perfect in their own, special way.

Woodland’s Father’s Day at Pebble Beach included a flushed 3-wood that set up birdie to give him a two-shot cushion, a wedge clipped off the 17th green that helped him preserve it, then a 30-foot birdie putt on No. 18 that ended the tournament with a flourish — and put him in the record book, to boot.

“My whole life, I’ve been able to compete and win at everything I’ve done,” he said. “It’s taken a while, but it’s trending in the right direction.”

Straight past Tiger Woods in the record book, in fact.

Woodland, whose wife, Gabby, is expecting twins in a couple of months to join their soon-to-be-2-year-old son, Jaxson, got to 13-under-par 271 with that closing birdie, beating by one the record Woods set for a U.S. Open at Pebble Beach during his 15-shot romp to victory in 2000.

But to say Woodland took the easy way to his first major title would be missing the point.

He spent the entire day holding off Brooks Koepka, who himself was shooting for history — trying to become the first player since 1905 to complete a U.S. Open three-peat.

Koepka made clear early that he was up for the challenge. He opened with four birdies over the first five holes to pull within a shot of Woodland, who was playing one hole behind.

They did, except it wasn’t a back-and-forth ballgame. Woodland never surrendered the lead.

It was at one shot when Woodland drove to the middle of the fairway on the par-5 14th, faced with the choice between laying up, the way most players have all week, or going for it and hoping the shot would hold on the severely sloping putting surface.

“We sat there and thought about it for a while and said ‘Let’s go, we’re out here to win,’” Woodland said.

The ball just cleared the bunker fronting the green, took two hops and rolled toward the collar left of the pin. A chip and a putt later, Woodland had a birdie and a two-shot lead.

That shot, made while still clinging to the two-shot lead, added to Tom Watson’s chip-in from the sand in 1982 and Jack Nicklaus’ 1-iron off the flag 10 years before that on the growing list of history-making moments on that storied 17th green.

With his ball on the front right edge of the putting surface, but with a small hill blocking his path to the hole, Woodland took out his wedge and made pure contact, sending the ball over the hump then back onto the green, where it checked up and ran out to tap-in range for par.

“When I started to transition into golf, the short game was what was really bad, to be honest,” Woodland said. “And so my whole deal was, I had to hit chips off putting greens all the time, and there were some times where superintendents weren’t a huge fan of me.”

He’s not bad with the putter on those greens, either.

After Koepka’s birdie putt on No. 18 slid just past to close his tournament at 10 under, Woodland carried a two-shot lead onto the 18th green and only needed to get down in three from 30 feet to secure the trophy.

He got down in one instead, raised his hands to the heavens then finished with a huge fist pump.

Not bad for a guy who thought basketball would be his best sport, but gave it up after a year of playing in college so he could get serious about golf.

“The question about if I ever dreamed of making the putt on the last hole of a U.S. Open when I was a kid, no, I didn’t,” Woodland said. “But I hit a lot of game-winning shots on the basketball court when I was a kid.”

Koepka said he wasn’t upset about this weekend.

When it was over, Woodland shared a long hug with his father, Dan, who coached him hard in every sport he played except for golf when he was growing up — made him work for his wins, made him earn everything he got.

“I wouldn’t be where I am today without my dad and the way he treated me and the way he was hard on me,” Woodland said. “And that’s something that I look forward to doing with my son.”