A riot story the media won't share - The Horn News 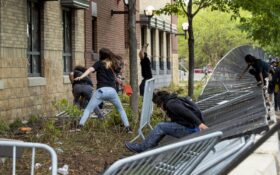 Ever since rioting began through America’s great cities after the death of George Floyd, the media have had only one story about it: Anything the demonstrators do is good, and anyone who got looted deserved it.

But there’s one story you’ll never hear from outlets that print “all the news that’s fit to print”: The 17-year-old young black conservative man who is raising money to rebuild the black-owned businesses that BLM and Antifa trashed.

C.J. Pearson is president of Last Hope USA, which has raised more than $160,000 to start helping out businesses in Atlanta.

His heart told him that sitting back wasn’t enough.

Pearson started his online fundraiser to “show that Black lives matter by supporting these Black-owned businesses that were adversely affected by these recent events,” he told local WSBTV. “Posting a black screen isn’t enough. We need to go do something.”

“It was incredible to see the response that it received,” he said.

His hometown needs all the help it can get.

Atlanta is a city with a historically black middle class, and a long line of prosperous entrepreneurs, who overcame slavery and segregation to build businesses that served the whole community.

That is, until May 29-30, when riots broke out across America.

Over two nights, looters cleared out stores and broke the windows of black business owners to protest racism.

The rioters did at least $10-$15 million of damage to businesses in Atlanta’s historic Buckhead neighborhood, according to one early estimate.

One of the businesses hurt the most was Wilbourn Sisters Designs, a family-owned dress shop on Peachtree Street.

“We’re here for God. This is our ministry,” one of the Wilbourn sisters, Janice Wilbourn, said. “This is our family legacy.”

Wilbourn said, with the new money, her business will be doing more community service along with its business—exactly what Pearson wanted to see.

He said he really cares about black businesses—unlike looters.

“I’ve got to tell you, burning down a Wendy’s or any establishment didn’t do anything for my black life,” the teen, who turns 18 next month, told Fox News. “So what I wanted to do is show that conservatives can come together and we can actually help people of color.”

The young conservative and his fellow donors are “backing their words with action and results.”

Left-wing revolutionaries are just “using” George Floyd’s death to score political points, he told the Centennial Institute during a webinar this month.

Meanwhile, Democratic Party leaders and politicians—all the way up to the presidential campaign of former Vice President Joe Biden—are collecting money on behalf of the rioters.

More than a dozen staffers on Joe Biden’s campaign promised they would personally raise money to bail out looters and rioters—groups that some have labeled domestic terrorists—arrested after destroying Minneapolis.

Far-left Rep. Rashida Tlaib, D-Mich., posted a video saying, “If we really believe Black lives matter — then we must show it in how we fund our communities and neighborhoods first”…but she was talking about government handouts for social workers and more of her democratic socialist platform.

@RashidaTlaib Funding communities & neighborhoods? Would you, by chance, be referring to all the black-owned businesses, the entrepreneurs whose lives your activist friends ransacked? Are you assuming those black business owners couldn’t have built their businesses w/o your help?

C.J. Pearson has done more as a teenager than all the leaders of the Democratic Party combined. That tells you how smart, savvy, and caring this young man is—and how worthless Democratic politicians are.