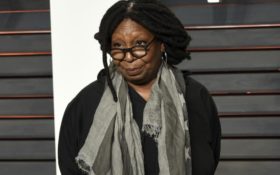 According to The Daily Wire, she screamed at — and then spit on — former Judge Jeanie Pirro, a conservative commentator that had been invited as a guest on her NBC show The View.

Pirro was invited to the show to discuss her new book, “Liars, Leakers, and Liberals: The Case Against the Anti-Trump Conspiracy.”

The segment quickly turned into a screaming match after Goldberg accused Pirro of “whipping up hate.”

“I’m still reeling from it to be honest with you. I went on thinking that we would have a discussion about the book. The truth is, that it was an attack on Donald Trump, and then on me,” Pirro recalled to Sean Hannity on his radio show Friday.

“I sat there as Whoopi Goldberg pontificated about how horrible Donald Trump was and at one point I said ‘you know I’m here to talk about the book’ and then she went ballistic and ended the segment,” Pirro said.

You can watch the nasty on-air exchange here —

At the end of the segment, Goldberg apologized to the audience and said she wasn’t being hysterical.

But that was just the beginning of the exchange.

Reportedly, after the dust had settled on-stage, Goldberg stormed backstage looking for a fight.

“When I went off the stage, Sean, I’m walking downstairs and I said something like, Whoopi I fought for victims my whole life and she came at me as I was leaving and she said ‘F you’ in my face – literally spitting at me, ‘F you, get the F out of this building!’ And I said to her, ‘Did you just say that?’ She said that’s what I said, ‘Get the F out of this building’ and she was screaming at me. I’m walking out of the building like a dog who was just kicked off,” Pirro said.

The more the president succeeds, the worse it gets.