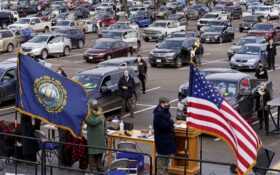 A New Hampshire man is accused of posting a fake Craigslist ad for a free trailer with a legislative candidate’s number on the day of the election, later telling investigators he meant it to be a joke after a flood of unwanted calls and texts jammed up the candidate’s cellphone.

Michael Drouin, 30, of Merrimack, was indicted on a felony charge of interference with election communications, the state attorney general’s office said Wednesday. The charge is related to an April 2021 special election in Merrimack to replace Republican New Hampshire House Speaker Dick Hinch, who died of COVID-19 in December 2020.

The candidate, Bill Boyd, a Republican who went on to win, turned off his phone after receiving more than 37 phone calls or text messages in 45 minutes on the morning of the election, prosecutors said.

A complaint was filed that day by the executive director for the New Hampshire Republican Party.

Drouin, who was registered as a Democrat and voted in the election, is accused of knowingly blocking access to Boyd’s communication equipment “with the intent of interfering with campaign activity.”

Drouin, who’s scheduled for a hearing in January, did not immediately respond to messages seeking comment.

“It was a joke, I meant no harm,” he told investigators in October 2021, according to a police affidavit. He said he wasn’t sure why he had chosen the date of the election, saying it was bad timing.

Boyd told investigators around the same time he knew Drouin through local organizations and had received a Facebook friend request from him. Boyd said he received a message from Drouin saying he had pranked him, that it was terrible timing, and that he’d like to take him to lunch to apologize.

The charge carries a penalty of 3.5 to seven years in prison and a fine of up $2,000. Anyone convicted of a willful violation of the state’s election laws loses their right to vote in New Hampshire.