A doorbell rang in Alaska... and you won't BELIEVE who was there - The Horn News 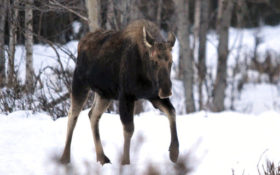 A moose used the doorbell to awaken a couple in Alaska.

The couple thought maybe it was an aftershock or some kids playing a prank when the doorbell rang in their Anchorage home early Wednesday.

Kyle Stultz tells KTVA-TV he looked out the door and found nothing.

He assumed it was kids playing “ding dong ditch.” Stultz decided to check his security camera.

The video showed a large moose backing its caboose right into the doorbell.

The family was relieved it was nothing else.

The Associated Press contributed to this article,